At least nine people have died and 32 have been injured after a tour bus carrying high-school students collided with a FedEx lorry in northern California, according to a California Highway Patrol (CHP) spokeswoman.

The crash occurred on Thursday after the lorry driver lost control of the vehicle, crossed over a divider on Interstate 5 and struck a passenger vehicle and then the tour bus, Fran Clader, CHP spokeswoman, said.

Clader said the bus was carrying high-school students and other passengers to Humboldt State University for a tour. The
crash took place near the community of Orland, about 150km north of Sacramento.

She said 32 of the injured were taken to hospitals in the area. Their condition was not immediately known. Interstate 5 was closed in both directions and was not expected to reopen until early Friday morning.

Pictures from the scene showed the bus reduced to a burned-out chassis and resting sideways across the highway.

A spokeswoman for FedEx Corp said the company was aware of media reports that one of its lorries had crashed into a tour bus in California.

“Our thoughts and prayers are with everyone involved in the tragic accident on I-5 in California,” Bonnie Kourvelas, spokeswoman, said.

“We are cooperating fully with authorities as they investigate.”

She said the condition of the lorry’s driver was unknown. Rollin Richmond, Humboldt State University president, said the students, from Southern California, had been due to visit the college campus on Friday.

“Our hearts go out to those who have been affected, and we are here to support them, and their families, in any way possible,” he said in a written statement. 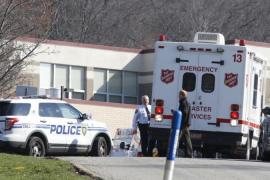 US stabbing rampage leaves many injured

At least 22 injured, four seriously, in mass stabbing by student in the state of Pennsylvania, say officials. 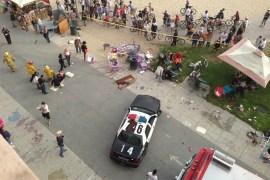 Man charged with murder over US car crash