More than 1,000 police, backed by the military and armoured vehicles, occupied a vast favela near Rio de Janeiro’s international airport months before the football World Cup.

A squadron belonging to the feared Special Police Operations Battalion, along with a dozen armoured vehicles, swarmed through the notorious Mare shanty town without facing resistance, while helicopters buzzed overhead at dawn on Sunday.

The slum is just a few kilometres from the airport and a potential through route for tens of thousands of football fans flying in and out of the city, which will stage seven World Cup matches including the July 13 final.

Brazilian authorities have stepped up efforts to quell violence in Rio as the football extravaganza looms closer, carrying out a huge slum “pacification” programme since 2008 aimed at making the city – which will also host the 2016 Olympics – safer.

Prior to Sunday, Police Pacification Units (UPPs) had been installed in 174 Rio favelas home to around 600,000 people.

On Sunday they took the initiative to enter Mare, a drug-trafficking stronghold and haven for organised crime that is considered one of the most dangerous places in the city.

Police had their weapons trained on the rooftops but, apart from a few bars close to the entrance of Mare that remained open, the labyrinth of narrow streets was empty and dark.

Rio’s security secretariat said 1,180 officers were involved in the operation, backed by at least 14 armoured vehicles and four helicopters.

In the operation, police seized “large quantities of drugs and weapons” that were hidden near the Olympic Village and a public school, said the GloboNews chain.

According to the intelligence services, drug traffickers who left Mare – home to around 130,000 people from 16 clustered neighbourhoods – after the announcement on Monday of the imminent occupation could come back later, meaning authorities face a long-term battle to keep the volatile area under control.

Later in the morning shops slowly began to open, but many residents in the favela were visibly irritated by the presence of security forces and journalists, an AFP news agency reporter at the scene said.

Few living there wanted to talk to the media. “Me, I think it’s fine, the state must be present everywhere in Rio,” a trucker called Jorge – he declined to give his full name – told AFP.

“Now it will depend on the police who move here because there are those among them who commit abuses.” 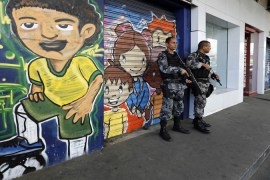 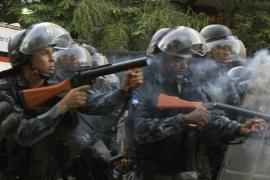 Hundreds of protesters clash with police in Rio de Janeiro over increased fares for public transport. 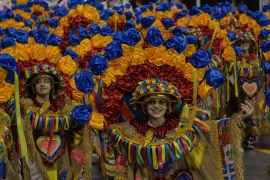 Thousands gather in Brazilian city as participants endeavour to show the world that the country is a safe destination.