Abdel Fattah el-Sisi, the general who ousted Egypt’s first freely elected leader last July, has declared his candidacy for a presidential election he is expected to easily win.

Wearing military fatigues and speaking in a nationally televised address , Sisi said it was the last time he would wear an army uniform and that “I give up the uniform to defend the nation” and run in the elections, which are expected next month.

“I have spent all my life as a soldier for the sake of the country … I am telling you that I intend to run for the president of Egypt, and this support from you will give me this honour,” he said.

Sisi said Egypt was “threatened by terrorists” and spoke of returning the country to dignity.

“It wasn’t the army or political forces who ousted the last two regimes; it was you the people. My entering the presidency race doesn’t not mean that others shouldn’t,” he said.

The 59-year-old Sisi is widely expected to win the vote, and restore a tradition of presidents from military background that Egypt had for all but one year since 1952.

He has been the country’s most powerful figure since removing President Mohammed Morsi, and Morsi’s once politically dominant Muslim Brotherhood has since been declared a terrorist group.

Among his supporters, Sisi is wildly popular. Many see him as the kind of strongman needed to stabilise a country in crisis. But he is reviled by the Islamist opposition as the mastermind of a coup against a freely elected leader.

Following Sisi’s announcement, there were protests by supporters of Morsi on the streets of the capital Cairo.

Magdy Karkar, a senior member of a Brotherhood-led coalition organising anti-government protests, said Sisi’s candidacy confirms that Morsi’s removal was a coup aimed at wrecking democracy, as Islamists have contended.

“His running will not achieve stability in Egypt. It’s true he has many supporters who love him or even worship him. But on the other hand, there are those who hate General el-Sisi and hold him responsible for the blood that has been shed,” Karkar told the Associated Press news agency.

Watching his speech in a coffee shop in Cairo, however, Sabry Ahmed, in his late 50s, said Sisi has what Egypt needed.

“He is a political man, a military man, and an economics man. He understands in everything regarding the state,”he said.

“We can’t compare him to anyone else. The country needs a strong man of his size.”

In the neighborhood where Sisi was born in old Cairo, celebrations broke out as soon as he finished his speech. A distant relative, Mohammed Haroun, cheered: “This is the best decision he took in his life.”

Commenting on Sisi’s candidacy, the United States, a major source of military aid to Egypt, said it did not support individual candidates or parties in Egyptian elections.

“As the election process moves forward we urge the Egyptian authorities to ensure that the elections are free, fair, and transparent; that all candidates are able to campaign freely, without fear of harassment or intimidation; and that the views of all the Egyptian people are fully represented,” White House National Security Council spokeswoman Bernadette Meehan said in a statement.

Sisi’s decision came amid reports that one person had been killed during protests against Monday’s court verdict that sentenced more than 500 alleged Muslim Brotherhood supporters to death.

At least 30 people were wounded in the protests over the ruling that drew criticism from international human rights groups and Western powers.

The authorities have yet to set a date for the presidential election. Leftist politician Hamdeen Sabahi, who came third in the 2012 election, is so far the only other candidate to have stated his intention to run.

General Sedki Sobhi, who holds the post of chief of staff, is expected to replace Sisi as army chief and defence minister. 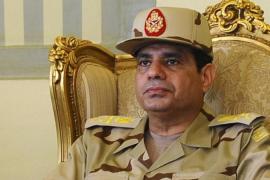 The Egyptian military chief has made a televised address announcing his decision to step down and run for president. 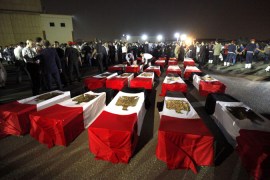 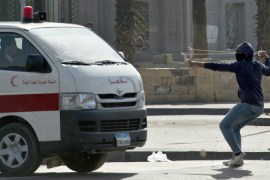