Heads of Arab states are holding their annual summit amid an unprecedented diplomatic fallout among the Gulf countries and tension over the crisis in Egypt and the conflict in Syria.

“The dangers around us are enormous and we will not move towards joint Arab action without our unity and without casting aside our difference,” Sheikh Sabah said.

He named no specific country, but was apparently referring to the rift in the Gulf Cooperation Council (GCC) over the role of the Muslim Brotherhood in the region.

Arab officials said some nations will likely use the summit to try to pressure Qatar to stop its perceived support of the Muslim Brotherhood and other opposition movements throughout the region.

Egypt and Saudi Arabia have labelled the Muslim Brotherhood a terrorist organisation, and two senior officials told the Associated Press news agency that those two countries would take the lead in attempting to isolate Doha by calling for a collective Arab approach to terror.

The summit follows weeks of escalated tensions over the issue. Bahrain and the United Arab Emirates have joined Egypt and Saudi Arabia in withdrawing their ambassadors from Qatar.

Qatar has reacted with dismay at the diplomatic gestures but insisted it will push ahead with its own policies.

In the summit, Qatar warned fellow states against branding groups as terrorists for political purposes.

“Terrorism has only one conception, the targeting and killing of civilians, the hating of civil institutions for political goals and aims,” Sheikh Tamim Bin Hamad Al Thani, the country’s emir, said.

“We cannot accuse a lot of sects of being terrorists because this will generalise terrorism instead of isolating terrorism… It’s not good enough for those who fail to achieve unity to accuse others of supporting terrorism in the country.”

Publicly airing differences among members of the GCC is unusual for the bloc, created in 1981 as a loose political and economic alliance. The members are Saudi Arabia, Bahrain, the UAE, Qatar, Oman and Kuwait.

Syria’s seat in the 22-nation Arab League will remain vacant although the last annual summit, held in Doha, granted the seat to the opposition. Syria’s membership was suspended in November 2011 over the government’s bloody crackdown on dissent.

The leader of Syria’s opposition National Coalition, Ahmad al-Jarba, was invited to address the Arab summit, but countries such as Iraq, Lebanon and Algeria expressed reservations to granting the seat to the opponents of the embattled Syrian president, Bashar al-Assad.

Saudi Arabia wondered why Syria’s main opposition bloc was not granted the seat and called for “changing the balance of forces” on the ground in the conflict.

“Exiting from the Syrian crisis requires changing the balance of forces on the ground,” Crown Prince Salman bin Abdul Aziz told the opening session, stressing the need for more support for the rebels.

Fadhel Jawad, the Arab League assistant secretary-general for political affairs, has said the Arab leaders will hold a special session during the summit in a bid to sort out their differences.

Algerian Foreign Minister Ramtane Lamamra said: “Not all issues are discussed in the meeting hall. Some issues are debated on the sidelines behind the scenes.” 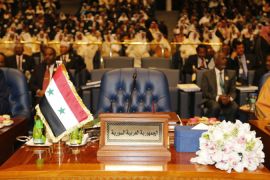 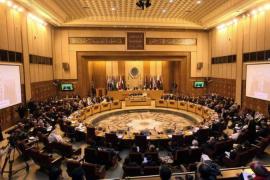 The Muslim Brotherhood’s role in politics will be the elephant in the room as a polarised Arab League meets in Kuwait. 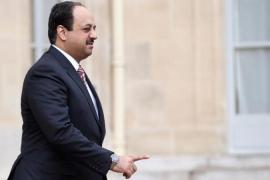 Foreign minister dismisses criticism from Saudi Arabia, UAE and Bahrain, saying policy is ‘openness towards all’. 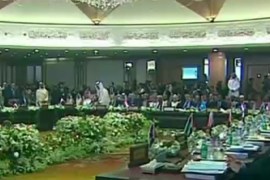 Foreign ministerial delegations fail to agree on who should represent Syria at the talks in Kuwait.