Polls have closed in El Salvador in a presidential election that could decide whether the country wants to keep the leftist party in power or return to conservative rule.

None of the three leading candidates was likely to receive a big enough majority in Sunday’s elections, setting in motion a run-off between the top two candidates in March.

But with over 50 percent votes counted, current Vice President Salvador Sanchez Ceren has 49 percent, while Norman Quijano of the right-wing Nationalist Republican Alliance (ARENA) is trailing with about 39 percent.

We just can't stand the violence any longer.

Supporters of two candidates also briefly scuffled in the capital.

Voters have been concerned about a weak economy and the growing number of deaths caused by street gangs.

The small but densely populated Central American country of six million has been struggling to control rampant gang violence and still burdened by the legacy of its bitter 1979-1992 civil war.

Our correspondent said there is no easy solution to the gang violence as it is “entrenched” in Salvadoran society.

“Some people would even say they are a parallel power to whichever government is in power at that moment,” he said.

Amid tight security, about 4.9 million voters were called to choose a successor to President Mauricio Funes of the leftist Farabundo Marti National Liberation Front (FMLN).

While there are five candidates, two are far ahead in pre-election surveys.

The top contender is Ceren, 69, of FMLN, a former civil war commander who on Sunday promised an inclusive government if he wins.

He said he would be “open to the participation of different sectors” and open the doors to all candidates to work together for “a grand national accord”.

Ceren’s main rival, former San Salvador mayor Quijano, 67, of the conservative ARENA party, voted at a school in the west of the city, praising what he called “peaceful elections”.

Antonio Saca, president from 2004 to 2009 who is running a distant third as the head of a coalition of rightist parties, said he was “optimistic” as he cast his ballot.

The latest polls predict that Sanchez Ceres, a former teacher, will garner between 38 and 47 percent of votes – not enough to guarantee a first round victory.

If no candidate obtains at least 50 percent, the top two will meet again in a runoff scheduled for March 9.

Since the early hours of the morning, supporters of the various candidates have set up stands in their party’s colors across the capital helping voters find their polling stations.

The FMLN, which turned into a political party at the end of the civil war, won the presidency in 2009 and Sanchez Ceren has tried to appeal to moderate voters in this campaign as he looks to keep his party in power.

Ceren rejects the idea of deploying the army to fight the gangs and instead promises to forge a political pact to break through a gridlock that has kept a divided Congress from carrying out reforms to tackle crime and weak economic growth.

The FMLN won power at the last election when it put up a popular journalist, Mauricio Funes, as its candidate.

Funes, who had no role in the civil war and has led the FMLN towards more moderate leftist policies, has launched popular welfare programs, such as free school uniforms and supplies for students and pensions for the elderly. 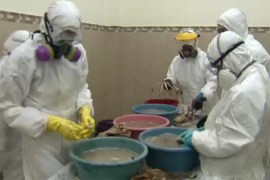 Salvadorians will elect a new president on Sunday, after a month where 31 bodies were found in 21 different locations. 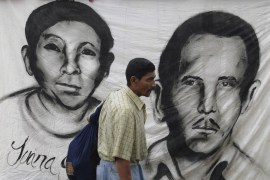 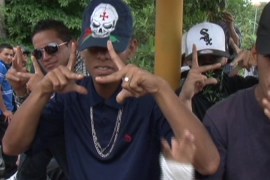 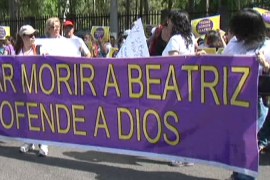