Jabhat al-Nusra in Lebanon, a group named after al-Qaeda’s Syrian affiliate, has said it carried out a suicide car bombing in a stronghold of the Lebanese Shia group Hezbollah that has killed at least four people.

The armed Sunni group said Saturday’s attack, which targeted a petrol station in Hermel in eastern Lebanon, was in response to Hezbollah’s involvement in Syria.

The petrol station is part of a charitable network set up by Mohammed Hussein Fadlallah, a leading Shia leader and Hezbollah spiritual guide who died in 2010.

It was the seventh attack to target Hezbollah in Lebanon since mid-2013, when the armed group sent men to Syria to fight alongside President Bashar al-Assad’s troops against mainly Sunni rebel groups.

Jabhat al-Nusra in Lebanon said on Twitter that the bombing was a “second martyrdom operation against the Party of Iran [Hezbollah] stronghold in Hermel … because of the continuation of the Party of Iran’s crimes against our oppressed people in our beloved Sham [Syria], and its insistence on sending more of its mercenaries to kill the Syrian people.

“Faced with the massacres it is carrying out, we can only repay the favour in its heartland, to push it to reconsider its calculations.”

The Hermel explosion occurred at around 16:00 GMT after dusk on Saturday near a school run by a charity group for impoverished children, some of them orphans.

An official speaking on Al-Manar said no children were injured.

Security forces later closed off the area and fire-fighters managed to extinguish the blaze.

Najib Mikati, Lebanon’s caretaker prime minister, condemned the bombing as a terrorist attack, and called for unity to “protect our homeland”.

Omran Zoabi, Syria’s information minister, speaking on Lebanon’s Al-Mayadeen TV, said “this terrorist attack, like those before it, only benefits the Israeli enemy”.

Saturday’s blast was the second blast in less than a month to hit Hermel, close to the border with Syria.

On January 16, a car bombing outside the main government administration building in Hermel killed three people.

That attack was also claimed by Jabhat al-Nusra in Lebanon, which has emerged only recently.

It is unclear if there is any relation between the group and Jabhat al-Nusra in Syria.

Jabhat al-Nusra in Lebanon had previously claimed another attack five days earlier in the Hezbollah-dominated southern suburbs of Beirut.

Al Jazeera’s Nisreen El-Shamayleh, reporting from Beirut, said: “In the latest sign that Syria’s war is spilling over into Lebanon, Hezbollah strongholds have been targeted four times in January alone. Lebanon is now left vulnerable to sectarian violence and its future is looking ever so bleak.”

While Hezbollah has sent fighters to battle alongside Assad’s forces, many Lebanese Sunnis back the rebels fighting his regime.

Lebanon’s northern port city of Tripoli has seen regular clashes between Sunni groups and Alawites, the Shia offshoot sect to which Assad belongs.

Other attacks in Lebanon have targeted opponents of Hezbollah and the Syrian government, including Mohammad Chatah, a Sunni politician who was killed in a car bomb blast on December 27 in Beirut. 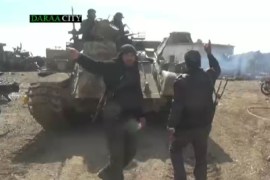 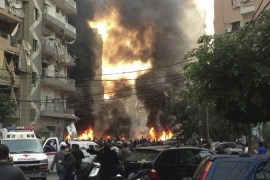 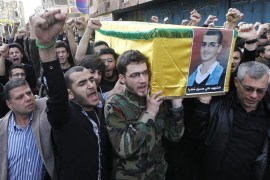 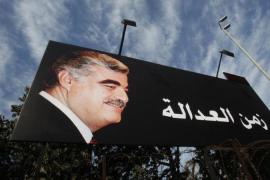