Prime Minister Stefan Lofven’s call for snap elections after just two months in office has taken Sweden by surprise and has left the country’s political scene in turmoil.

In a country where consensus is preferred over conflict, few observers had predicted that the far-right Sweden Democrats, which became the country’s third largest party in the September polls, would act out its threat of striking down the government’s budget bill and thereby make it impossible for Lofven to govern.

But after the vote in parliament on Wednesday, when the Sweden Democrats (SD) backed the opposition’s rival budget, the political chaos was complete.

Lofven was left with only two choices – to resign or call an early election. He chose the latter, announcing that Swedes will again head to the polls on March 22 – the first early election held since 1958.

Political scientist Marie Demker wrote on Twitter: “This has never happened in my lifetime. We live in a strange time. Sweden is a new country.”

A similar reaction was expressed by Lena Mellin of tabloid Aftonbladet, who noted that Sweden has not faced political chaos of this dimension earlier – at least not in modern times.

“Stefan Lofven is playing a very risky game, you can almost compare it to Russian roulette,” she wrote in a column, stressing that the outcome of the early election is impossible to predict.

She had previously predicted that Lofven rather than calling for an early election would seek to form a new government by getting rid of its coalition partner, the Green Party – a move that could have made deals with the opposition easier.

Lofven’s Social Democrats formed a minority government with the Greens after narrowly defeating the centre-right bloc, the Alliance, in the parliamentary election.

SD, which wants to reverse the country’s generous immigration policies and cut immigration by 90 percent, has been isolated by the other parties in parliament. But with 49 of 349 seats, the party still holds the balance of power.

One of the few commentators who did not express surprise over the snap election announcement was Eric Erfors of tabloid Expressen, who wrote that “bullying of SD” had paved the way for early elections.

When SD were elected into parliament in 2010 the party was treated like something the cat had dragged in.

He argued that the party’s decision to trigger a parliamentary crisis by supporting the opposition budget was probably caused by a desire to “teach the established parties a lesson”.

“When SD were elected into parliament in 2010 the party was treated like something the cat had dragged in,” Erfors wrote, mentioning that the Left Party had protested over having to share a corridor in the parliament building with SD and that the possibility of shrinking committees to block the party from all practical assembly work was discussed.

“Such an anti-democratic attitude laid the foundation for revenge in SD.”

The triumphant acting party leader, Mattias Karlsson, said on Wednesday that the early elections will be a “referendum on mass immigration”.

Political scientist Ulf Bjereld wrote on his blog that both the government coalition and its Leftist backers had reason to feel grief over the crisis.

“Through their inability to handle the parliamentary situation they have let the Sweden Democrats own the process,” his blog read.

Pointing to the fact that the Alliance is lacking a leader after former Prime Minister Fredrik Reinfeldt of the Moderate Party announced his resignation, he continued: “Now a ravaged red-green government is heading for an election against a leaderless Alliance and the outcome is extremely uncertain.”

The Moderate Party is not the only party without a leader: SD leader Jimmie Akesson is currently on indefinite sick leave citing burnout after a hectic election campaign, and it remains uncertain whether he will come back for the snap election.

Regardless of the election outcome, stability may not return to Swedish politics for quite some time. The two political blocs are weakened, and SD has vowed to strike down any government that does not restrict immigration.

Under the constitution, Lofven has to wait until December 29 to formally call for an early election.

Asked whether any party should look forward to the poll, political scientist Johan Hinnfors told news agency TT: “No, definitely not. It’s a huge gamble for all.” 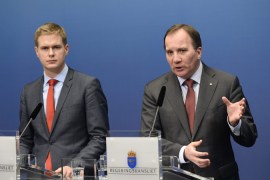 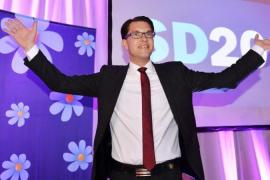