US Secretary of State John Kerry said that the momentum of the Islamic State of Iraq and the Levant (ISIL) has been “halted” by the air strikes that the coalition of western and Arab states have launched against the group.

Speaking at NATO headquarters in Brussels on Wednesday during the first high-level talks of a coalition of 60 nations fighting ISIL, Kerry said the the military campaign by the US-led coalition would “continue for as long as it takes to defeat the self-declared jihadists”.

“Our commitment will most likely be measured in years,” he said, adding: “Our efforts are already having a significant impact.”

through air assaults, the job would have been done. The fact that it has not been done proves that air assaults alone will not solve the problem… You have got to put boots on the ground to defeat the ISIL terrorists once and for all. “]

Iran is not a member of the coalition, but the claim suggested a tacit understanding between Tehran and the US to tackle the common threat from a group that proclaimed what it calls a caliphate in Iraq and Syria in June.

While there was no official confirmation or denial from Tehran, Iranian politician Hamid Reza Taraghi said in an interview that jet fighters had inflicted significant damage on ISIL forces in an operation carried out without consulting the US.

“Iran bombed [ISIL] independently, without coordination with the coalition led by the Americans,” the Wall Street Journal quoted him as saying.

Kerry made no comment on Iran, while Iraqi Prime Minister Haider al-Abbadi, asked about the Iranian action, said he had “no knowledge of any Iranian air strikes”.

The US launched its first strikes against ISIL in Iraq in August.

In late September the strikes were extended to ISIL targets in Syria, involving Washington as well as a number of allies.

Saudi Arabia, the United Arab Emirates, Jordan and Bahrain are taking part in the air strikes in Syria. Australia, Belgium, Britain, Canada, Denmark, France and the Netherlands are participating in Iraq.

Dozens more countries are offering other support including information and intelligence sharing.

Al Jazeera’s Tim friend, reporting from Brussels, said there were several points of views within the coalition.

“Across this coalition, there are those who want to see more being done, while others are offering words of caution about the consequences about moving too swiftly and then perhaps moving in the wrong direction,” he said.

The US has carried out the vast majority of the air strikes against the self-declared jihadists.

Joseph Kechichian, a senior commentator with the Gulf News, told Al Jazeera that the coalition allies needed a different approach in order to defeat ISIL.

“If it was possible to defeat them through air assaults the job would have been done. The fact that it has not been done proves that air assaults alone will not solve the problem,” Kechichian said from Beirut.

Washington says there are around 30,000 ISIL fighters in both Syria and Iraq, where the group is accused of atrocities including rape, crucifixion and the beheading of security forces and several westerners. 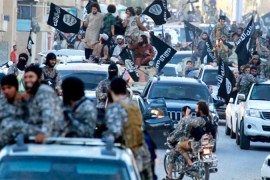 Syria: US raids have failed to weaken ISIL