Hundreds of ancient sites in Syria have been destroyed, damaged or looted in the course of the country’s ongoing conflict according to new “alarming” satellite evidence, the UN has said.

In a report published on Tuesday, the UN said 290 sites have been directly affected by fighting, of which 24 had been destroyed, 104 severely damaged, 85 moderately damaged and 77 possibly damaged.

From prehistoric settlements and ancient markets to world-famous mosques and Crusader castles, countless treasures of incalculable value have been affected.

The report, produced by Geneva-based UN institute, UNOSAT, focused on 18 areas, six of them listed as UNESCO world heritage sites: the Old City of Aleppo, Bosra, Damascus, the Dead Cities of northern Syria, the Crac des Chevaliers castle and the Greco-Roman oasis of Palmyra.

Aleppo, Syria’s former commercial hub where settlements date back 7,000 years, has been especially hard hit by the fighting between rebels and forces loyal to President Bashar al-Assad.

Al-Madina souq, the largest covered historic market in the world, has been been seriously damaged.

The 12th century Umayyad Mosque in Aleppo has also been severely damaged, with its minaret reduced to rubble, while a huge crater stands at the site of the famed Carlton Hotel, the satellite images show.

In Homs province, the famed Crac des Chevaliers castle, a UNESCO World Heritage site that had been used as a base by rebels, has a gaping hole in the ceiling  after coming under regime bombardment .

The UN images also show serious damage to Palmyra, known for its spectacular Roman colonnade, with the Syrian army building a road that cuts through the necropolis, damaging several tombs.

In the city of Raqqa, the stronghold of the Islamic State of Iraq and the Levant (ISIL), the Sufi Muslim Uwais al-Qarni Mosque and a shrine to Ammar ibn Yasir, one of the companions of Islam’s Prophet Muhammad, have mostly been destroyed.

Cheikhmous Ali of the Association for the Protection of Syrian Archaeology (APSA) told AFP that ISIL had also destroyed ancient Assyrian statues in the northwestern province of Hasakeh.

In Dura-Europos, in the eastern province of Deir Ezzor, the UN said looting at a site previously known as the “Pompeii of the desert” had been rendered “unrecognisable”.

The Syrian conflict, which began as a peaceful uprising against Assad’s rule more than three years ago, has become a bloody and protracted sectarian war killing more than 200,000 people. 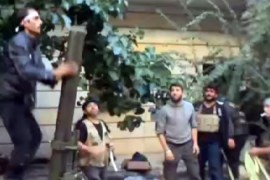 After three years of fighting, six of the country’s world heritage sites are on UNESCO’s endangered list. 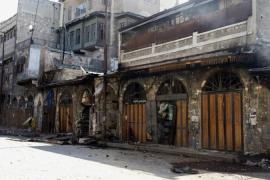 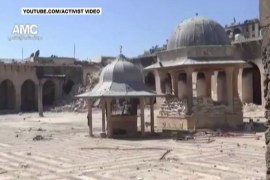