Turkey, Istanbul – Late on Saturday night, as Istanbul-based journalists representing several of the country’s media outlets flooded into a Zaman newspaper meeting room, supporters of Zaman began to gather outside. Many of them held signs reading: “Free media cannot be silenced.”

The sympathisers congregated after a self-proclaimed Ankara insider, using the Twitter handle “Fuat Avni”, warned of the impending arrests of some 400 supporters of Fethullah Gulen. Gulen, a US-based Muslim leader, is accused of attempting a power grab late last year.

Ekrem Dumanli, editor-in-chief of Zaman, the country’s most widely read newspaper, was one of the journalists the anonymous insider claimed would be detained. Ashen-faced on his third sleepless night, Dumanli told Al Jazeera that he trusted the anonymous leak, particularly given the country’s tense political climate. “Unfortunately, all media groups are under pressure,” he said.

Hours later, police arrested Dumanli, the head of a television station and two dozen others allegedly linked to Gulen across the country.

Gulen and Erdogan, once allies against the country’s secular military and political elite, have been locked in a quiet power struggle for years as the two gradually diverged on their visions for the rising regional power.

Gulen challenged Erdogan’s reaction last year to the Gezi protests and the Gaza 2010 flotilla incident, which resulted in nine deaths. In what many believe was a response, Erdogan announced plans to phase out a private supplementary school system that prepares students for university entry exams, about a quarter of them operated by Gulen’s movement – in a move that many believe was a direct attempt to thwart a major source of revenue and recruitment.

The simmering struggle burst into the open last December after a massive fraud probe opened into Erdogan’s government circles, including renowned business people, senior bureaucrats and sons of ministers. Officials allege that a power-hungry Gulen, playing puppet-master from the United States, was behind the leaks – a claim many of Gulen’s supporters deny.

Gulen has lived in a self-imposed exile since the 1990s, when he fled Turkey amid similar accusations of trying to overthrow the government. From his gated farming community in Pennsylvania, his grassroots movement of millions of people, which encourages a pro-western, pluralistic interpretation of Islam, has a network of thousands of businesses and schools around the world. He is also believed to pull considerable influence in the government through a strong network of supporters in the judiciary and police force.

Thousands of police and prosecutors have been purged since last December for their alleged connections with the movement. On Friday, approaching a year since the allegations first broke, Erdogan vowed to step up his campaign.

“We have gone into their lairs and we will go into them again. Whoever is beside them and behind them, we will bring down this network and bring it to account,” he told a business forum in Ankara.

We have gone into their lairs and we will go into them again. Whoever is beside them and behind them, we will bring down this network and bring it to account.

On Sunday, he made good on that promise. The recent string of arrests, which many believe will continue over the coming weeks, are only the latest in a protracted government campaign meant to weaken the movement’s pervasive influence across the country.

Those linked to the movement’s civil institutions say that they have been feeling strain for months.

“I cannot be optimistic about my future and I will probably have to go overseas,” said a senior at a university affiliated with Gulen, who, like many others on the receiving end of the fallout, declined to be named. “When [potential employers and graduate schools] see I went to Fatih University, they probably will not accept me.”

Gulen’s alleged manipulations in government are now commonly referred to in the Turkish government speeches through euphemisms like the “parallel state”. Experts say the discourse has led many to shy away from associating with the movement or people perceived to be be followers of it.

“It’s almost like McCarthyism,” Gareth Jenkins, an expert at the Central Asia-Caucasus Institute, affiliated with Johns Hopkins University, said. “It’s not all being driven by the AK Party any more; it doesn’t need to be. They’ve instilled this climate of fear. People don’t want to be targeted as part of this witch hunt just through association.”

Several months ago, as riots swept across the country over what many perceived as government inaction in Kobane as fighters from the Islamic State of Iraq and the Levant (ISIL) encroached upon the Kurdish city, Erdogan surmised that Gulen, or “Pennsylvania” as he called him – a reference to where the Muslim leader currently resides – was partly to blame for the violence.

Critics of the government say that such statements are attempts by Erdogan to deflect criticism from his own government by further vilifying and scapegoating Gulen.

“It’s a funny case,” Tercan Basturk, a representative for the Gulen-affiliated Journalists and Writers Foundation, told Al Jazeera. “Whatever negative is taking place in the country, it’s always blamed on the ‘parallel state’.”

Jenkins lent credence to many of the government’s claims against Gulen, noting that affiliates in the police force had long been suspected of wiretapping critics. At the same time, he expressed concern at the impacts on harmless and widely popular businesses and schools aligned with the movement.

“It’s like using a hammer to crack a nut,” he said.

Several months ago, the government voted against renewing a permit for Kimse Yok Mu, one of the country’s most popular private charities, to collect donations. Bank Asya, a private Gulen-affiliated bank, could become Turkey’s first bank to collapse in more than a decade. Now the worst-performing bank in the world according to Bloomberg News, Bank Asya suffered a mass withdrawal of deposits from state-linked companies earlier this year.

Zaman’s editor, Dumanli, who was arrested on Sunday, estimated that about 100,000 of its subscribers have cancelled their subscriptions, as major carriers, such as Turkish Airlines, have stopped selling the paper.

The managing editor of Today’s Zaman, Zaman’s English newspaper, Celil Sagir, has had his Twitter account censored by the government on three separate occasions.

“I think we can be 100 percent certain a lot of innocent people have been punished. It’s been very crude,” Jenkins said, referring to the mass purge of Gulen’s supporters from the police force.

Basturk of the Journalists and Writers Foundation, however, insisted that the group remains resilient against government efforts to weaken it. “Thank God there is still an independent judiciary which is active in our society,” he said, expressing certainty that the highest Turkish courts would shoot down any effort by the president to ban the movement.

The crackdown, he said, has emboldened Gulen’s supporters and has won over the sympathy of Erdogan’s opposition, driving a wedge in the country. Many supporters of Gulen now vote for the main opposition party in parliament, the Republican People’s Party, which remains loyal to the country’s founding principles of secularism.

“This is not a fight just between AK Party and the Gulen Movement,” he said. “This is a fight for Turkey’s direction.”

A press representative for the prime minister’s office declined to comment. Representatives from Gulen’s US-based movement did not respond to email requests for an interview.Asked whether there’s any hope for reconciliation, Basturk replied: “No, never … we have principles and ideas for democracy… But this is against the nature of [AKP’s] structure at the moment. Instead of going for full democracy, we are going backwards.”

A network of global charter schools, which provide a steady stream of revenue and recruitment for the movement, are also now facing pressure, as Erdogan works to crush the movement on the international stage.

Bloomberg News reported that schools in Azerbaijan, Turkmenistan and Gambia have closed since the start of the year and education officials in countries throughout both Africa and the Middle East say they have come under pressure from the Turkish government to shut down more Gulen-linked institutions.

Experts do not expect the crackdown on Gulen’s movement to let up anytime soon.

“Their influence has been irrevocably damaged. I don’t think they’re going to get this back,” Jenkins said. “I think Erdogan has won this war.” 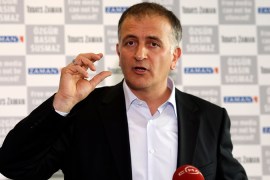 Journalists, television producers and police detained in spate of arrests targeting those close to Fethullah Gulen. 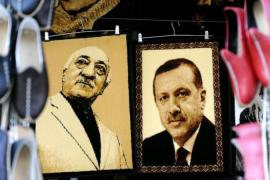 Gulen, Erdogan and democracy in Turkey

What will come out of the struggle between the Gulen movement and the AKP? 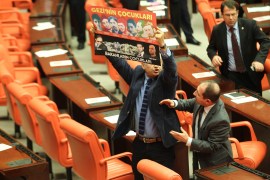 Recent corruption investigations reflect the rivalry between the ruling party and the influential conservative movement.