The armed rebel group FARC and the Colombian government have announced that they have agreed on conditions for releasing a captured general and four other people.

A joint statement from Cuba and Norway, who helped broker the deal, said the two sides agreed “on the conditions for the release” of Colombian army General Ruben Dario Alzate and four others taken captive in recent days by the Revolutionary Armed Forces of Colombia, also known as FARC.

FARC had blamed the situation on the government for its insistence on negotiating without a ceasefire.

The Colombian army had launched a massive search for Alzate, captured by FARC on Sunday, a move that had derailed peace talks as they hit the two-year mark.

President Juan Manuel Santos, who had suspended the talks in Havana, immediately praised Wednesday’s agreement, saying in a statement that government peace negotiators would return to the Cuban capital as soon as all the prisoners were released.

About 1,500 troops, 10 helicopters and planes, as well as boats and land vehicles had been deployed in the jungle-covered region of Choco to search for Alzate, the highest-ranking military officer to be captured by FARC in five decades of conflict.

Al Jazeera’s Gabriel Elizondo, reporting from Bogota, said it was clear that no one had been benefiting from the capture.

Alzate, 55, went missing with Corporal Jorge Rodriguez and army adviser Gloria Urrego as they travelled by boat to visit a civilian energy project in Choco, where the general heads a task force responsible for fighting the rebels and where drug gangs are rife.

Elizondo said that the rebels had said that they will also release two other soldiers they have in captivity.

Those two soldiers are believed to be troops captured in Arauca, on the other side of the country on the border with Venezuela.

The military told Al Jazeera there was likely to be two separate handover meetings.

Alzate was dressed in civilian clothes when he was abducted, which Santos said was a breach of protocol.

The FARC is the largest of the armed groups active in Colombia, with about 8,000 fighters.

The conflict, which has at various times drawn in drug traffickers and right-wing paramilitaries, has killed more than 220,000 people and caused more than five million to flee their homes. 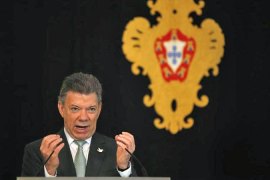 Is there hope for Colombia’s peace talks?

Will President Santos’s hopes of succeeding where his predecessors failed, be derailed by military official’s abduction? 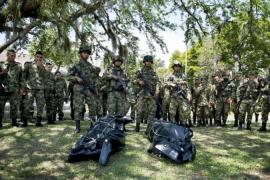 What peace in Colombia?

Colombians flee ongoing violence despite two years of peace talks between the government and FARC rebels. 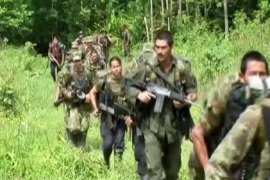 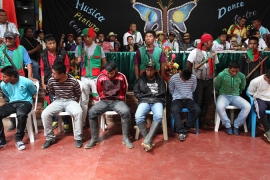