The court said on Friday that the vote did not take place on the same day across the country and that violated a clause in the constitution.

A court spokesman told reporters that judges voted 6-3, according to the AFP news agency.

With this ruling, we don't know where we are headed to in the future.


Polling was disrupted by protesters in around a fifth of constituencies, leaving the House of Representatives without a quorum to convene and select a new prime minister.

With the court ruling, a new voting is expected to be called, according to Al Jazeera’s Zeina Khodr, reporting from the Thai capital Bangkok.

It was unclear when a new vote would be held.

The case is one of a slew of legal challenges facing the government of Prime Minister Yingluck Shinawatra, who has withstood calls to resign despite months of political street protests.

Now in their fifth month, the protesters have shut government offices and at times blocked major thoroughfares in Bangkok to try to force Yingluck out. Hundreds of people have been injured in the violence and 23 have died.

Our correspondent said that following the ruling, there is fear of a new wave of violence.

He accused the opposition of disrupting the voting to justify the legal challenge, while insisting that Yingluck will stay until the next vote will take place.

“With this ruling we don’t know where we are headed to in the future,” he said.

The legal petition, filed by a Bangkok law lecturer, is based on arguments including that the election was not held on the same day in all constituencies, that candidate registration venues were changed without advance notice, and that a state of emergency prevented a fair vote.

A similar bid, submitted by the opposition on the grounds that the failure to hold the entire election on the same day was an attempt to grab power unconstitutionally, was rejected by the Constitutional Court last month.

Yingluck’s government, in a caretaker role following the incomplete February 2 election, faces a series of legal challenges that could lead to her removal from office, including negligence charges linked to a rice subsidy scheme.

Her opponents see the moves as a long-overdue effort to clean up politics, while her supporters reject them as a politically-motivated attempt to oust an elected government.

Yingluck has faced more than four months of street demonstrations seeking to force her from office and install an unelected government to oversee reforms and curb the dominance of her billionaire family.

It is the latest chapter in a political crisis stretching back to a military coup in 2006 that ousted Yingluck’s brother Thaksin Shinawatra, a divisive tycoon-turned-politician who lives in Dubai to avoid prison for a corruption conviction.

On Tuesday, Thailand ended a state of emergency in force for almost two months in Bangkok and surrounding areas, reflecting an improvement in security since protesters scaled back their rallies at the start of March. 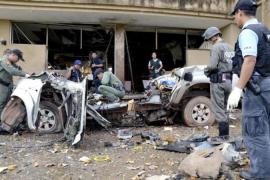 The Muslim population in Thailand’s south continues to suffer from the violence between insurgents and security forces. 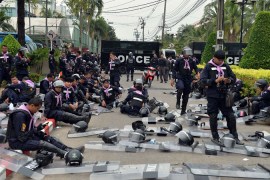 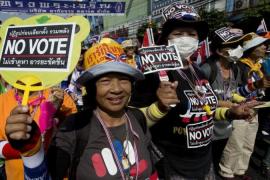 With protests and an election boycott, the February 2 elections are unlikely to change the status quo.