North Korea’s leader Kim Jong-un has won every ballot cast by voters in his district, where he ran uncontested during the first elections to the Supreme People’s Assembly legislature under his rule.

According to state media, Kim’s district, which is located on the symbolic Mount Paekdu, recorded 100 percent turnout during Sunday’s elections, without a single dissenting ballot.

“This is an expression of all the service personnel and people’s absolute support and profound trust in Supreme Leader Kim Jong-un as they single-mindedly remain loyal to him,” the state-run Korean Central News Agency said, according to an Associated Press news agency report.

Kim can now add MP to his many titles that include Supreme Commander of the armed forces and chairman of the powerful National Defence Commission.

Participation in the vote, although deemed ritualistic by external observers, is obligatory. Mobile ballot boxes have been created to cater to those who were ill and could not travel to balloting stations, the KCNA had reported.

A number of poems were produced to celebrate voting under titles including “The Billows of Emotion and Happiness” and “We Go To Polling Station”.

But while electors get to approve 687 deputies, they do not get to choose who represents them in the rubber-stamp legislature. Voters could only say either yes or no to a single candidate running in each district.

“If you vote no, you need to – very publicly – enter a separate booth, and that is something very few are willing to risk,” Al Jazeera’s Stefanie Dekker said.

The last elections were held in 2009 under the late leader Kim Jong-il. He received 100 percent of the votes and turnout was reported to be 99.98 percent, she said.

Analysts will be closely watching to see if the deputies this time around reflect a generational change as Kim looks to solidify his power and replace older cadres with younger, more loyal ones.

The Supreme People’s Assembly meets rarely, often only once a year. In practice it has little power and when it is not in session, its work is done by a smaller and more powerful body called the Presidium.

The new parliament is expected to meet next month. No date has been officially announced. 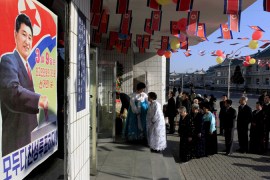 Voters are obliged to tick “Yes” for the sole candidate on their ballot paper. 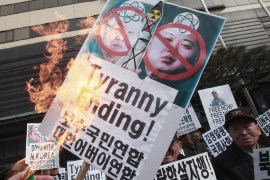 As a UN panel accuses Pyongyang of committing crimes against humanity, we ask what the international community will do. 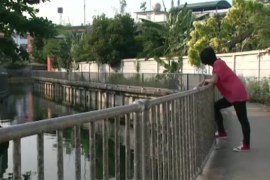