The United Nations is set to begin deliveries of aid to rebel-held areas in the Syrian city of Homs, a day after dozens of civilians were evacuated after surviving more than 600 days of an army siege.

“UN teams have pre-positioned food, medical and other basic supplies for immediate delivery as soon as the first group of civilians are out and we hope to send this aid on Saturday morning,” said the UN humanitarian co-ordinator in Syria, Yacoub El Hillo.

“We commend all involved for reaching this milestone today,” he added.

The Homs evacuation and delivery of food and medical supplies is part of a deal brokered by the UN between the Syrian government and armed rebels following months of negotiations.

In New York the UN spokesman, Farhan Haq, said the operations would continue.

“We understand that for the most part the operation went smoothly, but there were isolated reports of gunfire heard during the day (Friday),” he said.

“We’ll try to evacuate more civilians and deliver aid in the next few days,” he added.

The UN’s humanitarian chief, Valerie Amos, quoted by Haq, hailed the start as a “breakthrough” and describing it as “a small but important step toward compliance with international humanitarian law”.

On Friday buses ferried dozens of weary-looking evacuees to a meeting point outside Homs where aid workers, soldiers and police were gathered.

Footage broadcast on state television and other networks showed elderly and apparently frail men wrapped in blankets being helped into a bus by Red Crescent volunteers.

A UN convoy arrived on Friday after an uneasy ceasefire came into effect after the implementation of a truce discussed at peace talks in Switzerland last week.

Speaking to Syrian state television, Homs’ governor, Talal al-Barazi, said the atmosphere was “positive” ahead of the operation, which began around midday.

Al Jazeera’s Nisreen El-Shamayleh, reporting from neighbouring Lebanon, said it was delayed due to logistical and technical reasons, including security concerns.

It is thought thousands of people remain trapped in Homs, living in dire conditions with an acute shortage of food and medicine. The city is divided between rebel and pro-government areas

“This will allow innocent civilians, children and people with special needs, to leave the country,” he said.

“We’re very happy that we found the possibility to bring out these people and to provide those who are in need inside Homs, with the humanitarian aid they deserve.”

The rebel-held Old Homs districts in the centre of the city have been under tight siege by Assad’s troops since June 2012. 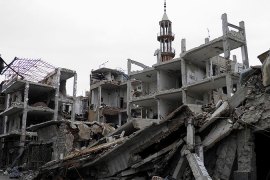 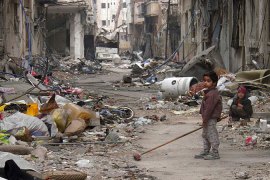 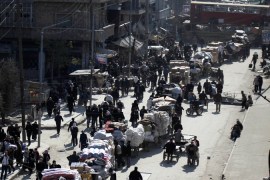