Austria’s two government coalition parties appear to have lost some support in parliamentary elections but seem likely to keep the absolute majority they need to stay in power for the next five years.

With more than 60 percent of Sunday’s vote counted, the Social Democrats (SPOe) of Chancellor Werner Faymann won 27.1 percent, down from 29.3 percent at the last election in 2008.

It was their worst result since 1945.

Michael Spindelegger’s conservative People’s Party (OeVP) fell to 23.8 percent from 26.0 percent, according to projections based on 71 percent of counted votes.

Meanwhile, a right-wing, anti-immigration and Eurosceptic party made gains. Heinz-Christian Strache’s Freedom Party (FPOe) was very close behind on 21.4 percent, up from 17.5 percent in 2008.

Eurosceptic parties collected more than a quarter of the parliamentary votes.

The Greens gained only slightly from the last elections five years ago, with 11.5 percent.

A final official tally was expected later in on Sunday.

Elected to parliament for the first time on 5.8 percent is Team Stronach, formed last year when Frank Stronach, 81, founder of car-parts manufacturer Magna, returned from Canada pledging to shake up the country of his birth.

Although Austria has the lowest unemployment rate in the European Union, voters have been looking for an alternative to the two parties that have dominated politics for the past 70 years and spent much of the past five years arguing or failing to agree on policy.

“The atmosphere in the country was marked neither by great satisfaction or criticism,” the SORA polling institute said in an analysis.

“Asked what has been done since the last elections in 2008, a majority of 46 percent said nothing.”

“The important thing is that we are number one,” Darabos said.

“We had a crisis in Europe, 20 of 27 governments have lost power in elections … The Social Democrats and the People’s Party have retained their majority.” 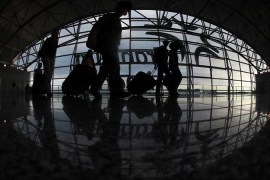 Europe’s job hungry migrants are flocking overseas, with many landing in nations once colonised by their home countries.