Angela Merkel, the German chancellor, will confront her centre-left election rival, Peer Steinbrueck, in a 90-minute TV debate on Sunday.

In what has been portrayed as the prime-time TV event of the year, the leader of the Social Democrat Party (SPD) will try to close the wide gap with the popular Merkel.

With three weeks to go to the election day, a poll published on Friday gave Merkel’s conservatives 41 percent of the vote, ahead of the SPD (26 percent) and its preferred allies, the Greens (11 percent).

Merkel, seeking a third term, has mostly ignored Steinbrueck who once served as her finance minister in a “grand coalition” during the election campaign.

With few actually divisive campaign topics to polarise the voters, the election campaign has been the most personality-based of recent times.

Steinbrueck, 66, may hope to increase his chances by underlining his pacifist stance as the former SPD Chancellor Gerhard Schroeder did 11 years ago by determinedly opposing the US-led invasion of Iraq during his election campaign.

“I want to make it quite clear for myself and for the SPD that we believe a military intervention would be wrong because we cannot see how it would help the people in Syria,” he said on Friday.

He also urged the US and Russian presidents, together with the heads of the UN and Arab League, to focus on negotiating a ceasefire in Syria.

Merkel previously said that Syrian President Bashar-al Assad’s government should not go unpunished over the alleged chemical weapons attack near the capital, Damascus, on August 21.

However, she has not clearly come out in favour of a military action against Assad regime.

She became the Germany’s first female chancellor in 2005 and is also the only woman to lead a major European power since Margaret Thacher of Britain.

During her first term, Merkel chaired a “grand coalition” between the conservatives and their traditional rivals, the SPD.

Merkel’s victory in the 2009 elections allowed her to drop the SPD in favour of the Free Democrats as coalition partner.

If SPD will be able to close the gap with Merkel’s conservatives, both sides would be forced to consider re-forming  a “grand coalition”. 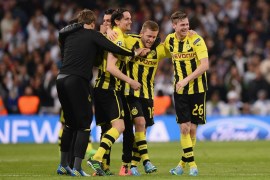 In Pictures: The best of Germany

These are the teams, managers and players who have captured the spotlight after their success in the European Champions. 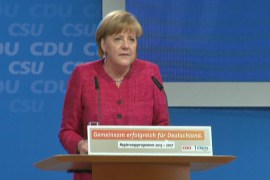 Parents take risks to home-school children in Germany, the only European country where practice is illegal.