Supporters of Egypt’s deposed president Mohamed Morsi plan to march in the capital, Cairo, and reiterated that they are committed to peaceful struggle one day after hundreds of their supporters were killed in a bloody crackdown.

“Marches are planned this afternoon from al-Iman mosque to protest the deaths,” a coalition of Morsi’s supporters said in a statement on Thursday, referring to a mosque in Cairo’s Nasr City neighbourhood.

World leaders condemned the attack on protesters who had been camped out for nearly seven weeks calling for the reinstatement of Morsi, Egypt’s first democratically-elected president. He was deposed by the army on July 3.

“We will always be non-violent and peaceful. We remain strong, defiant and resolved,” Brotherhood spokesman Gehad el-Haddad wrote on his Twitter feed. “We will push [forward] until we bring down this military coup,” he added.

But Morsi’s supporters have not all remained peaceful. Protests erupted nationwide after the Cairo crackdown, some of them violent. On Thursday, an angry mob stormed two local government buildings in Giza, throwing firebombs and setting the buildings ablaze.

The Health Ministry said on Thursday that 525 people had been killed nationwide, and more than 3,500 injured.

The Muslim Brotherhood has said the true death toll was far higher, with a spokesman saying 2,000 people had been killed in the “massacre”.

It was impossible to verify the figures independently given the extent of the violence.

Al Jazeera’s Jane Ferguson, reporting from al-Iman Mosque in Cairo’s Nasr City, said: “There are absolutely horrific scenes here just as funerals begin. The bodies are all across the floor surrounded by bloody shrouds. Lots of relatives crying, lots of anger.”

The military-installed government defended the crackdown, saying authorities had no choice but to act.

A curfew imposed overnight was relaxed in the morning, and traffic started flowing through the areas where clashes occurred on Wednesday.

At the site of one Cairo sit-in, garbage collectors cleared still-smoldering piles of burnt tents. Soldiers dismantled the stage at the heart of the protest camp. A burnt-out armoured vehicle stood abandoned in the street.

In Ankara, Turkish Prime Minister Recep Tayyip Erdogan called for the UN Security Council to convene quickly and act after what he described as a massacre in Egypt.

“Those who remain silent in the face of this massacre are as guilty as those who carried it out. The UN Security Council must convene quickly,” he said at a news conference.

The military-installed government has declared a month-long state of emergency and imposed the dusk-to-dawn curfew on Cairo and 10 other provinces.

The state of emergency allows the government to detain people indefinitely, a power it held for decades until the fall of autocrat Hosni Mubarak in a 2011 popular uprising.

Vice president Mohamed ElBaradei, a Nobel Peace Prize winner, resigned in dismay at the use of force instead of a negotiated end to the long-running standoff.

Other liberals and technocrats in the interim government did not follow suit. Interim prime minister Hazem el-Beblawy spoke in a televised address of a “difficult day for Egypt,” but said the government had no choice but to order the crackdown to prevent anarchy spreading. 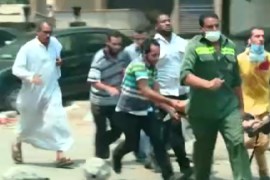 Blame game over violence in Egypt

Morsi supporters and government trade charges over who was at fault following worst violence since 2011. 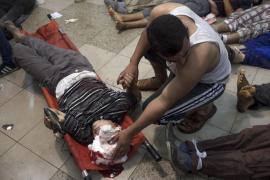 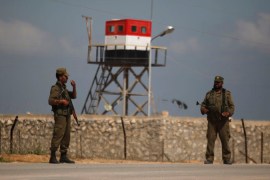