At least three people have died after clashes between loyalists and opponents of ousted Egyptian president Mohamed Morsi, as tens of thousands of people have demonstrated in cities across Egypt.

The three people were killed during clashes between rival demonstrators in the Nile Delta town of Mansoura, Al Jazeera’s Rawya Rageh reported from Cairo, the capital. At least six others were injured in those clashes.

The country’s military, meanwhile, has warned that it may crack down violently on any future mass protests against the overthrow of the president that it carried out on July 3.

A vast pro-Morsi crowd gathered at Cairo’s Rabaa al-Adawiya mosque on Friday, where the former president’s supporters have camped out since the military overthrew him.

About 10,000 protesters then set off in the direction of an elite military compound, scene of the deadliest violence since Morsi’s overthrow, carrying pictures of the deposed president and chanting slogans.

They were blocked by soldiers and armoured vehicles.

“Islamic, Islamic,” they shouted, of their hopes for an Islamic state, as formations of fighter jets flew overhead and military helicopters whirled in the sky.

Nadim Baba, reporting from Nasr City, said that at the pro-Morsi rally behind him, “some are members of the Muslim Brotherhood and some are not….There are rallies in 11 of the governates of Egypt.”

Regarding security, our correspondent said: “We heard there were skirmishes near Al Azhar Mosque where people threw stones at supporters of Mohamad Morsi,” but the situation had since calmed down.

“The rallies have been largely peaceful, which is what the rally organisers have been asking for.”

“[We have] the power of the people,” Essam el-Arian, the acting chief of the Brotherhood’s Freedom and Justice Party, told Al Jazeera, adding that those at the protest were not just supporters of his party, but “normal citizens of this country”.

Late on Friday afternoonm Egypt’s armed forces fired teargas at some of the pro-Morsi protestors who were heading towards the presidential palace on a road previously sealed off by the army. Following the teargas the crowd stopped moving forward, but have maintained their position.

Smaller rallies also took off elsewhere in Cairo, in Egypt’s second city of Alexandria, and other parts of Egypt after Morsi’s Muslim Brotherhood had called for a day of protests dubbed “Breaking the Coup”.

Al Jazeera’s Nicole Johnston, reporting from the pro-Morsi rally in Alexandria, said that “the numbers have really swelled after people broke their fast for Ramadan.”

“We haven’t seen a strong security presence here, but earlier in the day, we did have military jets fly over Alexandria.”

To every free Egyptian man and woman: Come out against the bloody military coup

Thousands of supporters of the military coup, meanwhile, gathered at a rival rally in Cairo’s Tahrir Square.

They set off firecrakers and chanted “The army and the people are one!”

Their demonstrations have been far smaller since the mass rallies clamouring for Morsi’s resignation in the days leading to the coup.

Al Jazeera’s Sherine Tadros, reporting from Cairo, said the anti-Morsi rally was meant “to show there is broadbased support for the ‘roadmap’…Now the issue of concern is that of security.”

The latest rallies come a day after Morsi’s army-installed successor President Adly Mansour vowed to fight for stability against opponents he accused of wanting to plunge the crisis-hit country “into the unknown”.

Morsi’s supporters have clashed several times with security forces, most recently on Monday night, when they fought with police near Ramsis Square, a major thoroughfare in central Cairo.

In a statement issued on Friday, the pro-Morsi coalition urged its supporters to remain peaceful and “adhere to civilised behaviour”.

“To every free Egyptian man and woman: Come out against the bloody military coup,” the alliance said.

Morsi’s supporters are also staging sit-ins outside a mosque in the Nasr City district, and near Cairo University.

Nearly 100 people have been killed in clashes since the removal of Morsi from power. 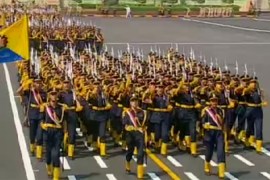 Many Egyptians thought days of army rule were behind, but ouster of Mohamed Morsi has put the military back in charge. 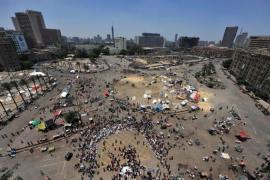 The Egyptian coup and the fate of political Islam

Political Islam must embrace pluralistic societies and reconcile religion with constitutionalism if it is to survive.