Goodluck Jonathan, the Nigerian president, has imposed a “state of emergency” in three states in an attempt to curb the increasingly violent attacks by armed group Boko Haram, saying the level of violence called for “extraordinary measures”.

The decision comes after a spate of attacks on security forces and government targets by Boko Haram in its northeast stronghold this month.

In a televised statement on Tuesday, the president said, “I hereby declare a state of emergency in Borno, Yobe and Adamawa states.”

Jonathan said more troops would “immediately” be deployed to the areas.

He made a similar move in January 2012 following a spate of Boko Haram attacks, but in that case the decree only applied to specific local government areas in four states.

Al Jazeera’s Yvonne Ndege, reporting from Nigeria said the president’s declaration was being made “to restore public safety and security”.

“This move does to some extent fly in the face of much of the rhetoric we have been hearing about the government’s efforts to broker a peace deal with Boko Haram,” our correspondent said.

“They have been saying in the last few weeks that things are going well, that many Boko Haram fighters have surrendered, but clearly this decision to declare a state of emergency in these states and to send more troops there does seem to bring the success that the government have been talking about in to question.”

In seeking to impose the measure across a whole state, Jonathan must first secure the approval of Nigerian legislators, which he pledged to do.

The enhanced powers that come with the measure are unclear.

When former president Olusegun Obasanjo invoked the measure twice in 2004 and 2006, he removed democratically elected governors and installed appointed administrators to manage the states, both former military officers.

Jonathan vowed that he would not employ that measure.

“The governors and other political office holders in the affected states will continue to discharge their constitutional responsibilities,” he said.

Boko Haram, an armed group, has been fighting the government aimed at creating an Islamic state in the country’s mainly Muslim north, and the resulting violence has cost about 3,600 lives since 2009, including killings by the security forces.

But a series of recent brazen attacks have raised concerns that fighters have become emboldened, with the Nigerian president saying that the latest violence amounted to “a declaration of war”. 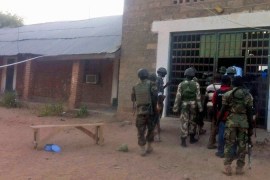 At least 55 killed and 105 inmates freed in coordinated attacks on army barracks, a prison and police post in Bama town. 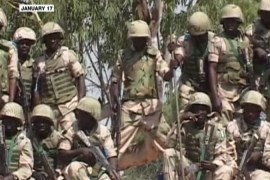 Conflicting reports put deaths as high as 200, or as low as 37, after clash between army and Boko Haram.