Venezuela is devaluing its currency by 32 percent against the dollar on the orders of President Hugo Chavez, in part to reduce the country’s budget deficit.

The bolivar will go from 4.3 to the dollar to 6.3 at the official exchange rate. The move was announced on Friday by Jorge Giordani, planning and finance minister, who said it will take effect on Wednesday.

The goal is to “minimise expenditure and maximise results”, he said.

One effect of a devaluation is to make a country’s exports cheaper and thus more enticing to buyers. But another effect is to cut the deficit, which in Venezuela last year was estimated to be nearly 10 percent of GDP.

The economy grew 5.5 percent last year and inflation was 20 percent. That was down seven points from the previous year and hit the government target, but was still the highest official inflation rate in Latin America.

Venezuela is South America’s largest oil exporter and has the world’s largest proven reserves. Its oil transactions are dollar-denominated, so the bolivar-value of those sales will now be higher, boosting state revenues on paper.

The change had been widely expected by analysts and business leaders since last year.

This is Venezuela’s fifth currency devaluation in a decade.

Giordani said the government would honour dollar-purchase requests made before January 15 at the old exchange rate.

Vice President Nicolas Maduro, who visited Chavez this week, said on Friday that Chavez was concerned about the Venezuelan economy and called for a “major effort” to maintain its pace of growth.

Chavez established currency controls in 2003, and the government sets the rate to curb capital flight. But the existence of a strong black market for the dollar shows the continuing desire for hard currency.

The devaluation announcement drew strong criticism from Henrique Capriles, opposition leader, who said that the government’s heavy spending was to blame for the situation and that officials were trying to slip the change past the public at the start of a long holiday weekend.

“They spent the money on campaigning, corruption, gifts abroad!” Capriles said in one of several messages on his Twitter account.

He also criticised Maduro’s handling of the situation. “They give Mr Maduro a little more time in charge and he finishes with the country,” Capriles said.

“Look at the inflation in January, and now the devaluation.”

Jesus Casique, an economist, said the devaluation would have a major inflationary side effect and the government should not see it as the main tool for reducing the deficit.

The devaluation comes amid growing uncertainty in Venezuela over the future of Chavez, who is convalescing in Cuba, where he underwent a fourth round of cancer surgery on December 11.

But since his operation, Chavez has neither been seen nor heard from, a dramatic departure for a president who had been a near-constant presence in state-run media.

Even among the Latin American leaders who have gone to Cuba to offer their well-wishes to Chavez, none has claimed to have seen him.

Chavez was too sick even to attend his own inauguration to a new six-year term on January 10, which prompted the government to indefinitely postpone his swearing in while extending him and his current administration in office. 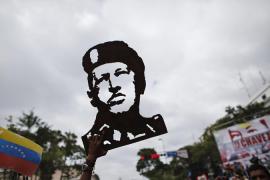 As news remains sparse on the fate of Hugo Chavez, Venezuelan politicians realise they can do nothing but wait. 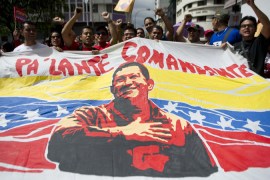 As Hugo Chavez’s inauguration for another term as president has been postponed, how does his illness impact the country? 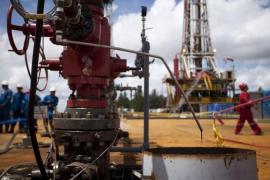 Q&A: Venezuela as a petrol powerhouse

One of the president’s main energy advisers details the role of oil in Hugo Chavez’s “Bolivarian Revolution”. 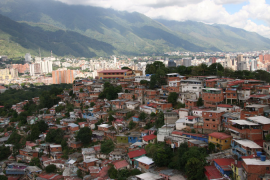