Police fired tear gas on protesters in Egypt as thousands took to the streets after opposition groups called for “Friday of dignity” rallies across the country demanding Egyptian President Mohamed Morsi fulfill the goals of the revolt that brought him to power.

Clashes erupted in several cities and towns in the Nile Delta province of Gharbiya, where the health ministry said 28 people had been injured, suffering mainly from tear gas inhalation.

Five people were also hurt in the Mediterranean city of Alexandria, the scene of brief clashes between police and protesters.

“Thus the police forces assigned to protect the facilities had to use tear gas to disperse them,” the source said.

Police warded protesters off into the large avenue flanking the palace in the upmarket neighbourhood of Heliopolis with security vans.

Al Jazeera’s Sherine Tadros, reporting from Cairo, said that the capital was relatively calm compared to previous marches and to elsewhere in the country.

“The people want the downfall of the regime,” the protesters chanted, while others slammed interior ministry officials as “thugs”.

Protests against the president have also been organised after the weekly Friday Muslim main prayers in several of Egypt’s 27 provinces.

Thirty-eight opposition parties and movements have called for the rallies, demanding a new unity government, amendments to the draft constitution and guarantees that the independence of the judiciary be maintained.

Earlier this week, the death of a pro-democracy activist following days in police custody sparked fury and reignited calls for police reform – a key demand of the uprising that toppled Hosni Mubarak in 2011.

His death came just days after footage was aired live on television of a man stripped naked and beaten by riot police during demonstrations near the presidential palace.

“Some are promoting and inciting political violence while others who claim to speak in the name of religion are permitting ‘killing’ based on political differences and this is terrorism,” the presidency said. 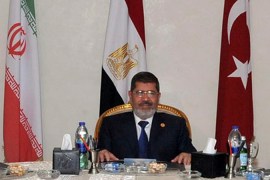 Move comes after death threats by hardline clerics and killing of secular politician in Tunisia. 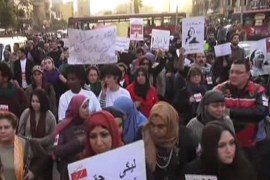 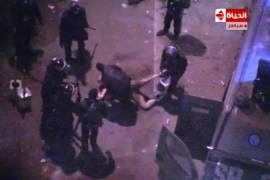 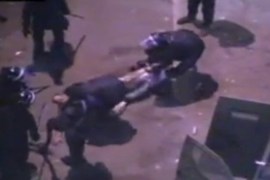 Interior minister says case of man stripped naked and beaten by police while cameras were rolling will be investigated.