The Algerian army has beefed up its positions on the border with war-torn Mali to prevent incursions by armed rebels fleeing north, an official in the southern town of Tamanrasset said.

“The army has been deployed on the border for a while, but reinforcements have been sent since the beginning of the war [in Mali]. It’s about preventing the infiltration of terrorist groups,” Mohamed Baba Ali, a member of parliament in the garrison town told the AFP news agency on Monday.

“Without these reinforcements, there would have been terrorist incursions from northern Mali.”

Algeria, which had always opposed military intervention in Mali, was reluctantly drawn into the conflict when it agreed to let French warplanes use its airspace, and closed its 1,400-kilometre southern border shortly afterwards.

On Sunday, the governor of Adrar, a town 1,400km southwest of Algiers whose region shares the longest section of border with Mali, said the authorities had registered no Malian refugees since the border closure.

The army reinforcement on the border comes as French warplanes have been pounding targets around Kidal in northern Mali in an effort to defeat rebels who have retreated from urban centres to mountainous areas, French officials said on Monday.

French Foreign Minister Laurent Fabius said the air strikes were aimed at cutting off supply lines to the rebels.

“It’s about destroying their rear bases and their storage facilities,” he told France Inter radio.

The latest air strikes have targeted the Adrar des Ifoghas mountains north of Kidal, the only major town not under government control which is held by Tuareg separatists from the MNLA movement.

The Algerian government has been tight-lipped since France launched major air strikes on Sunday near Kidal, the last bastion of armed extremists being targeted in northern Mali as part of a French-led offensive which began on January 11. 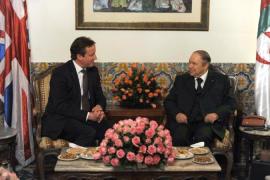 Prime minister will be first western leader to visit country since the recent deadly assault on its gas installations. 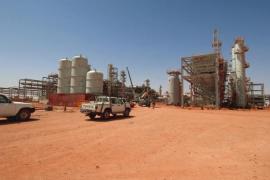