Pope Benedict XVI has held the last audience of his pontificate in St Peter’s Square on the eve of his historic resignation as leader of the world’s 1.2 billion Catholics.

Tens of thousands of pilgrims carrying banners saying “Thank you!” flooded St Peter’s Square on Wednesday to bid a final farewell to the 85-year-old Benedict, who abruptly cut short his pontificate by declaring he was too weak in body and mind to keep up with the modern world.

“Thank you, our creator, for this weather considering we are in winter,” he said.

“I feel I can keep you in my prayers … and entrust you all to the Lord so that we have full knowledge of his will through spiritual intelligence and knowledge.”

Benedict recalled moments of “joy and light” during his papacy but also times of great difficulty.

He thanked his cardinals, colleagues and ordinary faithful for their support and for respecting his decision to become the first pope in 600 years to resign.

“To love the church means also to have the courage to take difficult, painful decisions, always keeping the good of the church in mind, not oneself,” Benedict said.

Fransesco Clementi, an expert on Vatican, called the speech “wonderful”.

“[Benedict] says revolutionary things regarding the function of the pope. He says it is possible to separate and make a distinction between the political and religious functions of the pope,” Clementi told Al Jazeera from Vatican City.

About 50,000 tickets were requested for Benedict’s final master class, but Italian media estimated the number of people actually attending could be double that.

Pilgrims and curiosity-seekers picked spots along the main boulevard leading to the square to watch Wednesday’s event on giant TV screens.

No parking was allowed in the zone since 10pm local time on Tuesday, and cars were barred entirely from 7am on Wednesday.

Al Jazeera’s Barbara Serra, reporting from Vatican City, said large numbers of people converged in St Peter’s Square on Wednesday for Benedict’s final general audience – the appointment he kept each week to teach the world about the Catholic faith.

“St Peter’s Square has been turned into some kind of theatre.”

Al Jazeera’s Paul Brennan, reporting from St Peter’s Square, said most of the people had come from Rome.

Benedict is the first pope to step down since the Middle Ages – a break with Catholic tradition that has worried conservatives but raised the hopes of Catholics around the world who want a breath of new life in the Church.

Rome has been gripped by speculation over what prompted Benedict to resign and who the leading candidates might be to replace him.

Rumours and counter-rumours in the Italian media suggest cut-throat, behind-the-scenes lobbying, prompting the Vatican to condemn what it has called “unacceptable pressure” to influence the papal election.

Campaign groups have also lobbied the Vatican to exclude two cardinals accused of covering up child-sex abuse from the upcoming election conclave.

The Vatican has said Benedict will receive the title of “Roman pontiff emeritus” and can still be addressed as “Your Holiness” and wear the white papal cassock after he officially steps down at 1900 GMT on Thursday. 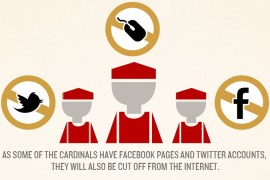 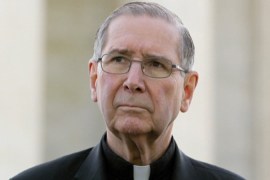 US cardinal’s role under scrutiny 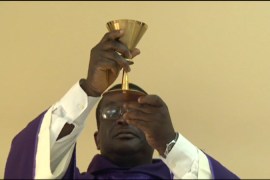 Could the next pope come from Africa?

Number of Catholics in the continent has risen from 55 million to more than 145 million in last 30 years. 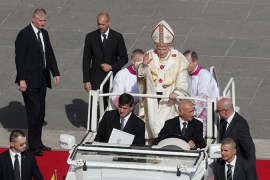