Coastguard boats and helicopters are searching the sea off the Italian island of Lampedusa for hundreds of missing people, a day after a boat carrying African migrants sank killing at least 127.

The mayor of Lampedusa, Giusy Nicolini, said the death toll from the sinking on Thursday was likely to rise. “It’s horrific, like a cemetery, they are still bringing them out,” she said.

We need only caskets, certainly not ambulances.


More than 150 people were rescued but several hundred others are still unaccounted for, according to the Associated Press news agency.

“We need only caskets, certainly not ambulances,” Pietro Bartolo, the chief of health services on the island, told Radio 24.

Al Jazeera’s Sonia Gallego, reporting from Rome, said the boat was carrying about 500 migrants from Eritrea, Somalia and Ghana.

“Italian officials described that many of these people had been in the water since the early hours of this morning and that it was a race against time to rescue as many of them as possible,” she said.

“It appears that there was a malfunction on board and the migrants were believed to have created a small fire on board to attract the attention of the coastguard. What we can gauge from what the survivors have been saying is that the fire caused panic on board, which caused the boat to flip over.”

Four coastguard and police vessels and two helicopters were in the area of the accident. A submerged vessel of about 20m in length had been identified in the water, officials said.

The boat is believed to have set off from Libya on Tuesday. A fishing boat raised the alarm at about 7:20am on Thursday (05:20GMT) and began pulling people out of the water before coastguard vessels arrived.

It sank just four days after 13 migrants drowned when their boat foundered off eastern Sicily.

Pope Francis on Friday mourned the death of the migrants in the latest tragedy. “Today is a day of tears,” he said.

Speaking to Al Jazeera, Judith Sunderland of Human Rights Watch said that people would continue to risk their lives in the crossing.

Thousands of migrants from Africa arrive in Italy on unsafe, overcrowded vessels every year, with most coming to Lampedusa, a tiny island just 113km from the coast of Tunisia.

Numbers have been boosted this year by thousands of refugees from the civil war in Syria, most of whom have arrived on the eastern coast of Sicily from Egypt. 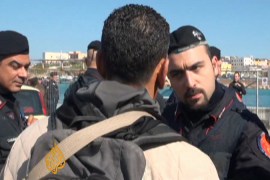 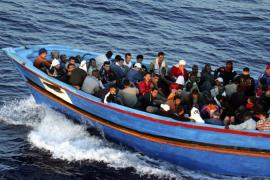 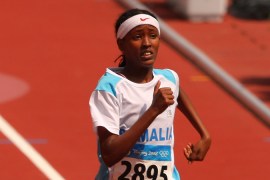 Al Jazeera’s Teresa Krug on her friendship with the Somali sprinter who drowned trying to reach Italy.