An armed religious movement that has taken control of large swathes of Mali has claimed to have executed an Algerian diplomat who was kidnapped during their takeover of northern Mali, according to a statement published by a Mauritanian news agency.

Taher Touati, the Algerian vice-consul, “was executed this [Sunday] morning at dawn” read the statement from the Movement for Oneness and Jihad in West Africa [MUJAO] published by online news agency ANI, known for carrying reliable information on extremist groups in the region.

“The Algerian government must take complete responsibility for the consequences of its stubbornness and the misguided and irresponsible decisions of its president and its generals,” read the statement.

Al Jazeera has been unable to independently authenticate the origin of the statement.

The Algerian foreign ministry was investigating the opposition fighters’ claim. As of Sunday afternoon, Touati’s family told the Algerian daily newspaper El Watan that they did not yet have any confirmation.

MUJAO had on August 24 given an ultimatum to Algeria, threatening to kill the hostage after Algiers said that they rejected its demands for the release of prisoners affiliated with the movement in a hostage swap.

MUJAO has claimed the April 5 kidnapping of seven Algerian diplomats from a consulate in the town of Gao.

A video MUJAO released on August 26 showed one of the four remaining hostages pleading with the government to save his life.

The wife of one hostage called on MUJAO to free them in a statement published by the Algerian press on Sunday, saying they were only “innocent civil servants”, and urged President Abdelaziz Bouteflika to work for their release.

Three of the hostages were freed in July.

Alessandra Giuffrida, an anthropologist at the School of Oriental and African Studies in London who specialises in the Tuareg of northern Mali, said that MUJAO “possibly” had links to al-Qaeda in the Islamic Maghreb and had no links with the Tuareg movement.

“One has to be quite careful about identifying these groups using ethnic labels, particularly as we know that the majority of the Islamists who are fighting in northern Mali are not Malians,” she told Al Jazeera.

In recent years they have been involved in drug trafficking and abductions of foreigners, she said.

Al-Qaeda in the Islamic Maghreb was originally an Algerian-based movement that migrated south in the Sahel region. The MUJAO, along with similar groups like Ansar Dine, have been enforcing strict Islamic law in northern Mali.

A convoy of lorries carrying men entered the town of Douentza early on Saturday morning and disarmed the local militia, witnesses and a spokesperson said.

Douentza is located about 800km northeast of the capital, Bamako, but is near the de facto border with Malian military-held territory that currently divides half of the country from the other.

The group’s leader, Oumar Ould Hamaha, told the AP news agency by telephone that the MUJAO had seized Douentza after a brief standoff with the local self-defence militia. Witnesses said there were no casualties.

The Malian military lost control of the northern half of the country, including the town of Douentza, in April following a coup by a small group of soldiers who managed to overthrow the country’s civilian government a month before elections were to be held.

Giuffrida told Al Jazeera that the MUJAO is actively recruiting impoverished Malians in the north as fighters.

“The less the Malian government makes its presence felt, the more the local population will feel that they might have no other option but to succumb to Islamists groups who are recruiting men who are quite desperate and jobless.”

Until now, the MUJAO did not have a presence in Douentza, relying instead on an agreement with the local militia, which patrolled the area.

Hamaha said, however, that his group had “closed their eyes” to numerous things the militia was doing and had lost patience in recent days after it became clear that the militia was attempting to operate independently, insisting on keeping their own name.

“I told my elements that we need to get rid of these people because they are refusing to respect us. We gave them the authorisation to come to this place, and now they want to work independently of us,” Hamaha said on Saturday.

“In the morning, when we encircled the town, we told them to turn in their arms. They resisted a little. They tried to make phone calls to ask for reinforcements, but when they saw that no one was coming to help them they laid down their arms in order to avoid a bloodbath. We tied them up and they are now with us.”

Moussa Ongoiba, a resident of Douentza, said that he counted at least 10 lorries carrying the Islamists. After patrolling the town the rebels took over a hotel at the entrance to Douentza, which now serves as their military base, he said.

After settling in, the Islamists, said another resident Oumar Samba, called a meeting with officials from the mayor’s office and from the town’s major civic organisations. The townsmen asked MUJAO to return the arms they had seized from the self-defence militia.

“The mayor’s office and civic leaders demanded that they return the arms taken from the militia,” said Samba. “But the Islamists did not accept. Many of the members of the militia have fled in order to leave Douentza. The rest that stayed behind have been detained by the Islamists.”

The fall of Douentza would appear to show that Islamist forces are gaining territory and moving closer to southern Mali. 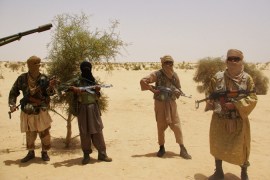 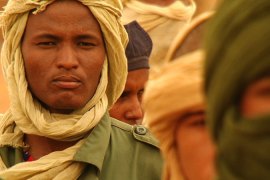 Amid desertification and drought, tensions rise as rival armed groups vie for control of the impoverished region. 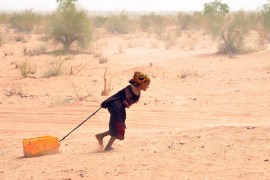 The destruction of religious shrines by hard-line fighters is a blow to pluralism in North Africa.