Major Japanese firms have temporarily shut factories and offices in China in response to the series of violent anti-Japan protests across China over the weekend.

Japanese media said on Monday that the electronics producer Canon will suspend operations at three of its four factories in China.

Panasonic said one of its plants had been sabotaged by Chinese workers and would remain closed on Tuesday – a memorial day in China when it marks the anniversary of Japan’s 1931 occupation of parts of mainland China.

All Nippon Airways Co reported a rise in cancellations on Japan-bound flights from China.

Al Jazeera’s Marga Ortigas, reporting from Hong Kong, said that Chinese protesters were attacking anything with links to Japan. “Now it is spreading to more and more Chinese cities,” she said.

Police fired tear gas and used water cannon to repel thousands of protesters occupying a street in the southern city of Shenzhen, near Hong Kong.

As the territorial dispute escalates over a chain of islands in the East China Sea, Chinese warships have been conducting live ammunition drills there.

With some people holding a banner calling for a “bloodbath” in Tokyo, Shenzhen protesters clashed with riot police, who fired tear gas to disperse the crowd, Hong Kong broadcaster Cable TV showed.

It also showed footage of more than 1,000 protesters burning Japanese flags in nearby Guangzhou and storming a hotel next to the Japanese consulate. Chinese state media reported a turnout of more than 10,000 in the city.

Demonstrators looted shops, attacked Japanese cars and broke into a dozen Japanese-run factories in the eastern city of Qingdao, according to the Japanese broadcaster NHK.

“Regrettably, this is a problem concerning the safety of Japanese nationals and Japan-affiliated companies,” PM Noda told a talk show on NHK.

The protests first erupted in Beijing and other cities on Saturday, when demonstrators besieged the Japanese embassy, hurling rocks, eggs and bottles, and testing cordons of anti-riot police.

Thousands of people continued protesting in Beijing on Sunday.

Sino-Japanese ties have long been plagued by China’s bitter memories of Japan’s military aggression in the 1930s and 1940s and present rivalry over resources and regional clout.

Relations between the two countries, whose business and trade ties have blossomed in recent years, chilled in 2010,
after Japan arrested a Chinese trawler captain whose boat collided with Japanese Coast Guard vessels near the islands of Senkaku, called Diaoyu in China.

The territorial dispute escalated on Friday when China sent six surveillance ships to the uninhabited islands, after the Japanese government bought them from their private owners.

The mission was “successful” in asserting Beijing’s jurisdiction over the islands, Xiao Huiwu, deputy head of the China Marine Surveillance agency, told Xinhua, as it “achieved the goal of demonstrating China’s sovereignty claim and ensured the country’s maritime interests”.

Though Japan has controlled the islands for decades, China saw the purchase as further proof of Japan’s refusal to negotiate.

China is under strong popular pressure to take a tough line with Japan.

It will also have to be cautious not to let the protests spin out of control.

The influential Chinese tabloid, the Global Times, published by the Communist Party mouthpiece People’s Daily, said backing off was not an option for China.

“China should be confident about strategically overwhelming Japan,” it wrote, saying the Chinese military should “increase their preparation and intensify their deterrence” against Japan.

“China will not shy away if Japan chooses to resort to its military.”

Pictures posted on Sina Weibo, China’s version of Twitter, showed marches on Sunday in half a dozen cities around the country, while the state-run Xinhua news agency reported protests in five others. Japanese media, however, said the protests had spread to “at least 108 cities” across China.

“Such large-scale uniform banners and dresses cannot be made in one day. Do you really believe it’s people-initiated?” wrote a Weibo user named Linglingqi.

Another named Afraxafra said: “I feel such a massive demonstration definitely cannot be organised by a small number of average people.”

Xinhua said that companies and “social groups” organised some protests, while others were publicised through online forums and messaging services.

A commentary from the agency called the weekend protests “a reasonable move and natural reaction” to Japanese “provocation” and urged Tokyo to take notice, even as it warned protesters against damaging property.

China National Radio said 1,000 Chinese fishing boats were preparing to head to the disputed waters after the fishing season in the area resumed.

Another flashpoint could be Tuesday’s anniversary of the 1931 “Mukden incident” that led to Japan’s invasion of Manchuria, which is commemorated every year in China.

In a further assertion of its sovereignty, China has been holding military drills near the disputed islands.

Separately, Leon Panetta, US defence secretary, gave warning on Sunday that territorial disputes involving China and other countries in Asia could end up in war if they were not toned down.

“I am concerned that when these countries engage in provocations of one kind or another over these various islands, that it raises the possibility that a misjudgment on one side or the other could result in violence, and could result in conflict,” he said.

“And that conflict would then have the potential of expanding,” he said, when asked about a worsening clash between China and Japan over an archipelago they both claim.

Speaking before arriving in Tokyo on the first stage of a trip to Asia, Panetta appealed for restraint amid mounting tensions over territorial rights in the East China Sea and the South China Sea.

Earlier, Al Jazeera’s Ortigas said the protests may have been encouraged to distract Chinese citizens from their domestic concerns.

“There have been accusations of corruption,” she said.

“There has also been widespread unrest socially in China from what we understand. At the same time, there have been questions about the smoothness of the leadership transition, which is in the works for the end of this year.” 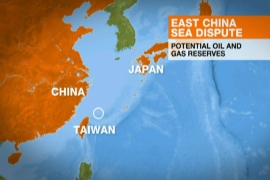 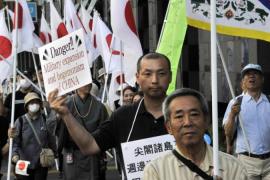 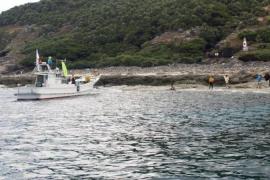 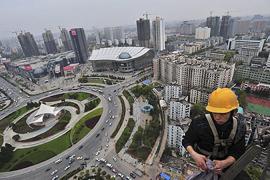