The latest unrest broke out on Wednesday along roads leading to a shaft run by Amplats – the world’s top platinum producer – in the same region as the Lonmin plant where 45 people have died in a wildcat strike that started last month.

“There is a strike, mine workers are gathering,” police spokesman Thulani Ngubane told the AFP news agency.

“They are rioting, barricading the roads with tyres, tree trunks and rocks.”

Anglo American Platinum, known as Amplats, denied its workers were on strike, saying only that some of its staff were unable to report for duty overnight amid intimidation on the way to Rustenburg plant, northwest of Johannesburg.

An AFP reporter on the scene however said there were no barricades around the mines by 1000 GMT, but around 1,500 striking workers were moving from shaft to shaft trying to stop those on the job to down their tools.

Workers “were unable to clock in for night shift due to fear of intimidation and threats by unidentified individuals in and around our Rustenburg operations”, Amplats spokesman Mpumi Sithole said in a statement.

At least 45 people have died – including 34 in a police shooting last month which has been described as the worst case of police violence since the end of apartheid – since a strike over pay was launched at the Marikana mine.

The site is run by Lonmin, the world’s third biggest platinum producer, and workers there have yet to reach a deal with management and return to work.

Al Jazeera’s Mike Hanna, reporting from Johannesburg, said the onoging strike at the Lonmin mine was influencing industrial actions in other areas.

“Clearly, the impact of the striking workers is having on mines in this region is immense,” said Hanna.

Malema has galvanised mine workers since police killings at another platinum mine in August, and his plans to address the military unnerved the government.

Malema’s comments came on Tuesday as the death toll in the month-long strike in Marikana rose to 45, after a man’s hacked body was found earlier that day at a platinum mine owned by the Lonmin company.

“A body of a man was found dead,” said police spokesman Thulani Ngubane. “He seems to have been hit with a sharp object,” he told the AFP news agency after local media reported that the corpse had two gashes in the head.

Tensions have been high at the mine, where workers refuse to return to work since striking on August 10 unless the world’s number three platinum producer bows to demands for a wage increase to $1,526.

The company said only three per cent of its 28,000-strong workforce resumed work, and strongly condemned the intimidation of non-strikers.

“The continuing efforts of a minority to keep the mine closed through threats of violence now pose a real and significant threat to jobs,” it said.

Police said that the unrest at the Anglo American mine began with 1,000 protesters at the Siphumele shaft, and spread to other mines by Wednesday morning. They said that workers were setting up barricades and rioting at Rustenburg on Wednesday.

Workers at Gold Fields’ Beatrix gold mine are also due to join the strike later this week, the National Union of Mineworkers (NUM) said on Wednesday.

Wage talks between the management and workers in Marikana, meanwhile, are in danger of breaking down, religion-based mediation group Bench Marks Foundation said.

Eight thousand striking miners and their followers, shadowed by police in armoured cars and helicopters, marched on Tuesday to a hospital to see some of the 190 miners who say they were beaten and tortured in police custody.

On Tuesday, Malema took up the workers’ call, urging employees at Gold Fields to strike for five days every month until their demands were met.

“This is a serious revolution, don’t give up!” Malema told a cheering crowd of around 3,000 at a stadium in Carletonville, west of Johannesburg. “You must render the mines ungovernable.”

He accused the NUM of being aligned with the country’s political elite.

Malema was expelled earlier this year by the ANC for ill-discpline. He has since been a vocal critic of President Jacob Zuma, who belongs to the ANC.

Once a staunch supporter of Zuma before a fallout as the party’s youth leader, Malema has stated he wants to see the head of state removed from the ANC leadership at forthcoming party elections in December.

The winner of the vote will automatically become the ANC candidate for the 2014 presidential elections and likely be South Africa’s next president. 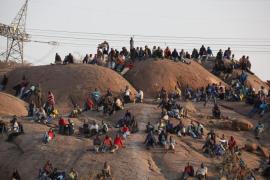 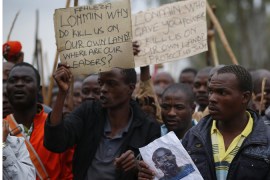 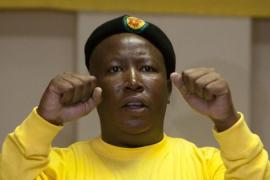 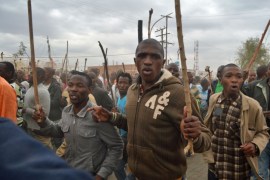