Egypt has launched air strikes in the Sinai region close to the border with Gaza, killing more than 20 people, in response to a deadly attack on Sunday on a police station, the state-run Ahram news website has reported.

The air strikes on positions in the town of Sheikh Zouaid on Wednesday followed the deaths of 16 border guards at the weekend in an attack by gunmen whose identities are yet to be determined.

The strikes followed clashes between armed men and security forces at several security checkpoints overnight in the Sinai region.

Armed men opened fire on checkpoints in al-Arish and in the nearby town of Rafah on the border with Gaza, according to a reporter for Reuters and state media.

Six people were injured in the attacks late on Tuesday night, including two police officers, three army soldiers and one civilian, sources told Al Jazeera. The civilian is said to be in critical condition.

A cement production company in Sinai, which belongs to the military, was also attacked. Two gunmen suspected in that attack have reportedly been arrested.

Exchanges of gunfire continued late into the night, state news agency MENA said, adding that security forces had closed the road where the assault took place.

On Wednesday morning, just hours after the attacks, Egypt’s military launched an assault on targets in Sinai, Al Jazeera’s Jamal Elshayyal reported from the city of al-Arish.

“Over 48 hours since that audacious and shocking attack on the Egyptian military post here in Sinai, it seems that the army has decided to hit back if you will,” Elshayyal said.

“Over the last couple of hours we have heard that helicopters from the airforce, and on the ground tanks and other personnel carriers moved towards an area in Sinai which is essentially being seen as the stronghold of many of the armed tribes and armed assailants.

“The military it seems has decided to strike back against the people they believe were behind these attacks,” he said.

Egyptian security officials say it is the first time that the army has fired missiles in Sinai since the 1973 war with Israel to recapture the peninsula.

Lawlessness in the rugged desert region bordering Israel has spread since the fall of Hosni Mubarak, the former Egyptian president, in an uprising 18 months ago and the political instability that has followed.

One of the checkpoints attacked on Wednesday has been attacked 28 times since the uprising, the state-funded Middle East News Agency said.

A few hours after the eruption of the clashes, hundreds of protesters gathered in Arish demanding state protection and chanting: “God is Great”.

Security forces closed Arish’s main highway shortly after the start of the attacks.

Earlier on Tuesday, crowds of angry mourners wept at the military funeral in Cairo of the 16 guards killed in what was the deadliest assault in decades along Egypt’s tense Sinai Peninsula border with Israel and Gaza.

In reaction to Sunday’s attacks, Egypt began to seal off smuggling tunnels into the Gaza Strip, a security source said.

A Reuters reporter in Rafah said heavy equipment was brought to the Egyptian side of the tunnels, which are used to smuggle people to and from Gaza as well as scarce food and fuel for the small territory’s population.

No group has yet claimed responsibility for the initial Sinai attack.

An Egyptian armed forces’ statement suggested that groups on both sides of the border may have been involved. 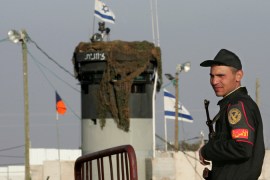 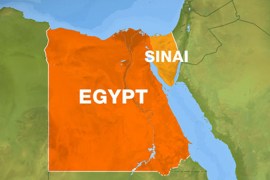 At least 16 officers killed and others wounded in armed attack on police station near the border with Israel.

President pledges to retake control of Sinai after 16 Egyptian guards killed in armed attack near the Israeli border.