In a meeting with Iran’s highest leaders, Ban Ki-moon, the UN secretary-general, told Ayatollah Sayyed Ali Hosseini Khamenei, the nation’s supreme leader and Mahmoud Ahmadinejad, the Iranian president, that “concrete” progress is
needed to end the showdown over their country’s nuclear drive, a UN spokesman said.

At Wednesday’s meeting, described by the Islamic Republic as a diplomatic coup over Tehran’s foes in the US and Israel, the UN chief also presented a tough message on the nation’s internal human rights situation, their caustic comments on Israel and Iran’s involvement in the ongoing turmoil in Syria, Martin Nesirky, UN spokesman, said.

Ban called for “concrete steps to address the concerns of the International Atomic Energy Agency and to prove to the world that its nuclear programme is for peaceful purposes”.

In his individual meetings with Khamenei and Ahmadinejad, Ban, who was to go on to attend a summit of Non-Aligned Movement (NAM) states on Thursday and Friday in Tehran, “regretted that little tangible progress has been achieved so far during those intensive talks” and added “that the talks needed to be serious and substantive”.

The UN chief also condemned what Nesirky called “recent rhetoric we have heard from all kinds of quarters” about a possible Israeli or US military strike on Iranian nuclear facilities.

But Ban also took the Iranian leadership to task over their comments on Israel.

Khamenei this month called Israel a “cancerous tumour” while Ahmadinejad has repeatedly cast doubt on Israel’s right to exist.

The UN leader “strongly objected to recent remarks from Iranian officials denying the Holocaust and Israel’s right to exist.

He said such offensive and inflammatory statements were unacceptable and should be condemned by all,” Nesirky said.

The Syria conflict and human rights also took a prominent role in the talks.

The UN chief urged the president and supreme leader “to use Iran’s influence to impress upon the Syrian leadership the urgent need for the violence to stop and to create the conditions for genuine dialogue”.

Iran has been accused of breaching UN sanctions by providing arms to President Bashar al-Assad’s forces.

The Tehran government has given backing to the mediation efforts of UN-Arab League envoy Kofi Annan and his replacement Lakhdar Brahimi.

But it has said that Assad cannot be forced out of power.

Ban “called on all states to stop supplying arms to all sides in Syria,” his spokesman said.

The UN leader reaffirmed his comments that Iran has “an important role” to play in any solution to the Syria conflict, which activists say has left about 24,000 dead.

Human rights in Iran “remains a source of concern,” Ban told the country’s top leaders. “He said fundamental civil and political rights should be respected,” Nesirky said, amid mounting international criticism of Iran’s use of capital punishment and action against political opponents and ethnic minorities.

Nesirky said that Ban had also met Saeed Jalili, former nuclear negotiator and top aide to the supreme leader and other top officials in the parliament and government.

“These have been very serious meetings and extremely detailed meetings,” the spokesman commented. 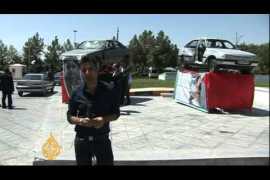 The Non-Aligned Movement realigns in Tehran?

Scratch below the surface and you see, perhaps, a movement that is being invigorated, that’s finding a purpose. 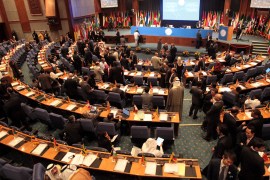 Mosaddegh and the legacy of Non-Aligned Movement

The Islamists and the monarchists might distort the image of Mosaddegh, but not his memory in the hearts of people.