Lakhdar Brahimi began his diplomatic career as a representative of Algeria’s independence movement when he was only 22. He has since gone on to become one of the world’s leading diplomats, navigating some of the most challenging conflicts.

Brahimi’s appointment as the United Nations-Arab League Joint Special Representative to Syria – confirmed by the UN on Friday – the 78-year-old will put his decades of experience to the test. He will be replacing Kofi Annan, whose mandate is due to expire on August 31.

Testimony to his influence, he helped cement theUni UN’s multilateral strategy on Afghanistan in his role as the UN’s envoy following the September 11, 2001, attacks on the US.

“It is a mark of the authority carried by Mr. Brahimi, a former Algerian foreign minister and veteran United Nations troubleshooter, that much of what the United Nations subsequently does will depend on what he reports and deems useful,” the International Herald Tribune‘s Serge Schmemann wrote in November 2001.

Brahimi has often been outspoken, opposing foreign intervention in several conflicts and clashing publically with the US over their strategy in Afghanistan and Iraq before his retirement in 2005.

Speaking to Al Jazeera’s Riz Khan in 2009, the Algerian described his approach as being “very much a third world kind of diplomacy … where the border is not very clear between politics [and diplomacy]”.

Born in the Algerian town of El Azizia, near the capital, Brahimi was a founding member of the Algerian Muslim Students’ Union and participated in the national students’ strike in 1956.

He embarked on his diplomatic career at age 22, when the National Liberation Front recruited him for the role of the movement’s ambassador to southeast Asia in its campaign to win international support against French colonial rule.

Upon independence in 1962, he became foreign affairs secretary. A Nasserist, he soon became Algeria’s ambassador to Egypt, followed by a string of other foreign postings. In the 1980s he was under-secretary-general of the Arab League. He helped negotiate the 1989 Taif agreement that brought Lebanon’s civil war to an end.

From 1991 to 1992, he served as foreign affairs minister in Sid Ahmed Ghozali’s government.

He retired from Algerian political and diplomatic life in 1993, at age 59, and has since called on other members of his generation to do the same.

“It’s time to make way for others,” he said in an interview with the Algerie-Focus news website in March 2012 [French], before Algeria’s controversial parliamentary elections.

“Many of us ended up, at a very young age, in critical positions, firstly in the struggle for independence, then in the newly independent Algeria,” he told Al Jazeera in 2009.

Brahimi went on to become the United Nations’ special representative in Haiti, the Democratic Republic of the Congo and in South Africa, ahead of the first post-apartheid elections that brought Nelson Mandela to power.

“There are small moments, short moments, of incredible happiness and a sense of achievement,” he told Al Jazeera.

“Probably the best of those was South Africa and leading the United Nations mission during the election in 1994.”

He represented the United Nations in Afghanistan during Taliban rule, and returned to the role in 2001 after international intervention.

He represented the United Nations in Afghanistan during Taliban rule, and returned to the role in 2001 after international military intervention in that country.

He was the UN special representative to Iraq following the US-led intervention there in 2003, until his resignation in 2005.

Ban Ki-moon also appointed Brahimi to head the investigation into the bomb attacks on UN headquarters in Algeria on December 11, 2007, that killed at least 31 people.

His advocacy of a non-military solution in Iraq, along with his condemnation of Israel’s treatment of the Palestinians during his term as the UN’s Iraq envoy, drew a strong reaction from many proponents of the war.

William Safire, an editorialist for the New York Times who vocally supported the war in Iraq, attacked the diplomat in 2004, writing: “His strategy is to gain quick local support by denouncing Israel (always an Arab street-pleaser) and by aligning the UN with those Iraqis who – having been cured of crippling despotism – now feel free to throw their crutches at the doctor.”

The pro-American Iraqi politician Ahmed Chalabi labelled Brahimi an Arab nationalist and argued that neither he, nor the UN, should be involved in Iraqi politics. Chalabi felt that Brahimi was blocking his path to national politics, but nonetheless went on to become Iraqi prime minister in 2005.

The Algerian has also been criticised from those who opposed the invasion of Afghanistan and Iraq.

Responding to the announcement that Brahimi was a contender for the envoy position, Asad AbuKhalil, a leftist commentator on the Arab world, argued that Brahimi was the choice of the US and its allies.

The Algerian had played a minimal role in the Taif Accords, the Lebanese-American political scientist wrote in an editorial for the Lebanese website Al-Akhbar English published last Wednesday.

Brahimi told Al Jazeera that Iraq was one of the biggest disappointments of his career.

“It was terribly difficult to be in an occupied country, eating everyday with the occupiers, living under the protection of the occupiers, [gave me] an uncomfortable feeling every single minute of the day and of the night,” he said.

The Algerian was awarded Harvard Law School’s Great Negotiator Award in 2002 for the role he played in negotiating an interim government after the fall of the Taliban.

In 2010, he was presented with the Jacques Chirac Foundation Award for Conflict Prevention in recognition of his work in Lebanon, Afghanistan and Iraq.

Brahimi is a member of the Elders, an international non-government organisation of eminent public figures including Nelson Mandela, Jimmy Carter, the former US president, and Martti Ahtisaari, the former Finish president.

To see Riz Khan’s One on One interview with Lakhdar Brahimi from April 2009, click here.

To see David Frost’s Frost over the World interview with Lakhdar Brahimi from May 2009, click here. 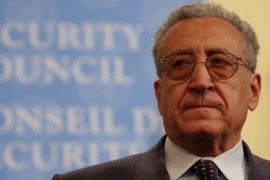 The member of Nelson Mandela’s The Elders discusses the plight of Aung San Suu Kyi.