Hillary Clinton, the US secretary of state, warned that time was running out for the Syrian regime and it needed to start a political transition to save the country from a “catastrophic assault”.

“It should be abundantly clear to those who support the Assad regime their days are numbered,” Clinton told reporters on the sidelines of a conference on Afghanistan in Tokyo on Sunday.

But she acknowledged that efforts, led by UN-Arab League envoy Kofi Annan, to get the regime of Syrian President Bashar al-Assad to halt its brutal crackdown on the opposition were proving difficult.

“It is confirmed that Mr Annan will visit Damascus, within the framework of his mission, for discussions with the Syrian leadership on the subject of the six-point plan,” ministry spokesman Jihad Makdissi said.

Annan himself in an interview with the French daily Le Monde said his six-point plan to end hostilities in Syria had not been successful so far, and there was no guarantee that it would succeed.

Activists say more than 17,000 people have now died since the uprising began in March last year.

“What Kofi Annan said should be a wake-up call to everyone because he acknowledged that there has not been movement by the Syrian regime in accordance with the six-point plan,” Clinton said.

The top US diplomat added: “The sooner there can be an end to the violence and a begetting of a political transition process, not only will fewer people die, but there’s a chance to save the Syrian state from a catastrophic assault that would be dangerous not only to the country, but the region.”

Clinton was speaking after attending talks in Paris on Friday in which countries pledged to increase pressure on Assad to step down by seeking a tough UN resolution backed by a threat of sanctions.

She had also met with members of the Syrian opposition leading efforts to topple Assad, whose family has ruled the Arab nation for four decades.

“There’s no doubt that the opposition is getting more effective in their defence of themselves and is going on the offence against the Syrian military and the Syrian government’s militias,” Clinton told reporters Sunday.

She also pointed to a number of high-level defections, warning the Assad regime that “the sand is running out of the hour glass”.

“We want to make clear to the Syrian regime that they need to be willing to end the violence and start the serious business of a political transition,” Clinton added.

Meanwhile, Syrian forces attacked Aleppo and Deir Ezzor provinces as at least 13 people, including 10 civilians, were killed across the country on Sunday, the Syrian Observatory for Human Rights said.

The violence followed a bloody day in which 77 people were killed on Saturday, among them 39 civilians, 25 soldiers and 13 rebels, according to the Britain-based watchdog.

On Sunday, regime forces shelled the villages of Miadin and Al-Tabeya Jazeera in the eastern province of Deir Ezzor, killing three people, two of them children.

Heavy shelling was also reported in Aazaz town in the northern province of Aleppo from midnight and into the morning, with explosions heard from far outside the town.

Six people were killed in gunfire in the village of Sahel al-Ghab in the central province of Hama, while a woman was killed in random shooting in the Damascus countryside.

In Idlib province, in northwestern Syria, the army killed two rebels in the town of Khan Sheikhun, the watchdog said, citing activists.

And a rebel was killed in the southern province of Daraa, cradle of a 16-month uprising against Assad.

More than 17,000 people, including 11,815 civilians, have been killed in Syria since the outbreak of the revolt in March 2011, the Observatory reported Saturday.

The total also includes 4,316 members of the army and security services and 881 deserters, Observatory director Rami Abdel-Rahman said by phone.

Rebels who are not army defectors are included in the civilian toll. 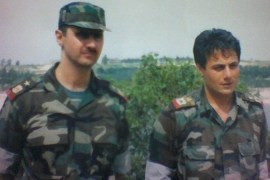 Manaf Tlas, a Republican Guard commander and friend of the president, has fled and is reportedly bound for Paris. 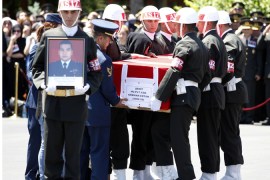 Prime Minister Erdogan interrupts vacation to attend the ceremony for the two pilots shot down by Syria.