Republican candidate Mitt Romney has made a major pitch to black voters, with a heavy emphasis on the economy, but was booed upon criticising President Barack Obama and promising to get rid of the administration’s health care overhaul.

Democrats said on Wednesday that Romney was making a statement just by speaking to the annual meeting of the National Association for the Advancement of Colored People (NAACP), the oldest US civil rights group.

At the speech in Houston, Texas, Romney received applause several times, but murmurs turned into jeers when he accused Obama of failing to spark a more robust economic recovery.

Obama won 96 per cent of the black vote in 2008 on his way to becoming the first African-American US president, and he expects high support again in the November election. While his attempt to give more Americans health care coverage remains unpopular, it is his signature domestic achievement.

“I know the president has said he will do those things,” Romney said. “But he has not. He cannot. He will not. And his last four years in the White House prove it definitively.”

But finally he stopped, amid the crowd’s disapproving response.

“If you want a president who will make things better in the African-American community, you are looking at him,” Romney said. “You take a look.”

His speech tried to show independent and swing voters that his campaign is inclusive.

“If equal opportunity in America were an accomplished fact, then a chronically bad economy would be equally bad for everyone,” Romney told the crowd. “Instead, it’s worse for African-Americans in almost every way.”

The economy is the main issue in this year’s tight presidential race. And with the US unemployment rate stuck at 8.2 per cent, it is an area where Obama is especially vulnerable.

The unemployment rate among blacks is even higher, at 14.4 per cent. Romney argued he is best suited to create more jobs and mentioned his plan to increase school choice; he’s called education the “civil rights issue of our era”.

Obama spoke to the NAACP convention during his 2008 campaign but does not plan to speak this year. Instead, Vice President Joe Biden will address the convention on Thursday.

“The first thing you need to do is show up, so I ultimately think [Romney’s] doing the right thing,” said Rep Tim Scott of South Carolina, one of two black Republicans in Congress.

“What he’s saying to everyone is that he’s [running to become] America’s president and not just those folks he thinks he can get votes from right now. I think that’s a very important statement.”

All in the family

Romney has a personal history with civil rights issues. His father, George Romney, spoke out against segregation in the 1960s and as governor of Michigan toured his state’s inner cities as race riots wracked Detroit and other urban areas.

He went on to lead the Department of Housing and Urban Development, where he pushed for housing reforms to help blacks. And his son invoked that legacy on Wednesday.

In recent months, Obama has approached race from an intensely personal perspective.

After the shooting of unarmed black teenager Trayvon Martin by a neighbourhood watch volunteer in Florida – an act many blacks saw as racially motivated – Obama spoke directly to Martin’s parents from the Rose Garden.

But diminished enthusiasm for the president in the wake of the economic downturn could dampen black turnout. That could make the difference in Southern states Obama won in 2008, particularly North Carolina and Virginia, both important swing states.

Other factors could keep blacks away from voting booths. Romney’s address to the group came as Democrats and minority communities expressed concern over a series of tough voter identification laws in a handful of states.

Critics say the laws, for which Romney has expressed support, could make it harder for blacks and Hispanics to vote. 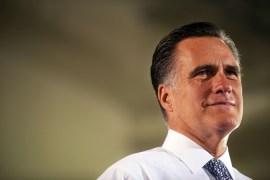 US president argues tax cuts made by his Republican predecessor should remain, but not for wealthy Americans. Presidential hopeful Mitt Romney raises $100m in June, with supporters saying $1bn could be in sight. 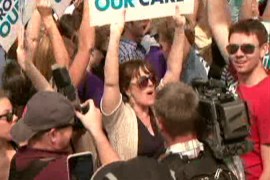