The year-long trial of former Egyptian president Hosni Mubarak came to a close on Saturday, when the Cairo criminal court handed down a verdict: life in prison.. The charges against Mubarak, who ruled Egypt for nearly three decades, included ordering the murder of protesters during last year’s revolution.

Egyptian courts have also brought criminal charges against more than a dozen members of his inner circle, including his two sons, who are also scheduled to receive their verdict on Saturday. Some have already been convicted; others, like business tycoon Hussein Salem, fled the country after Mubarak’s downfall.

The graphic below shows the other Mubarak confidantes facing criminal charges. Hover over the photos for more information. 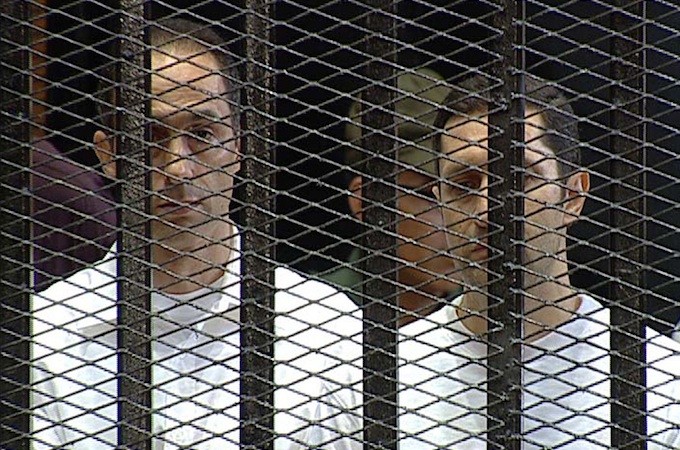 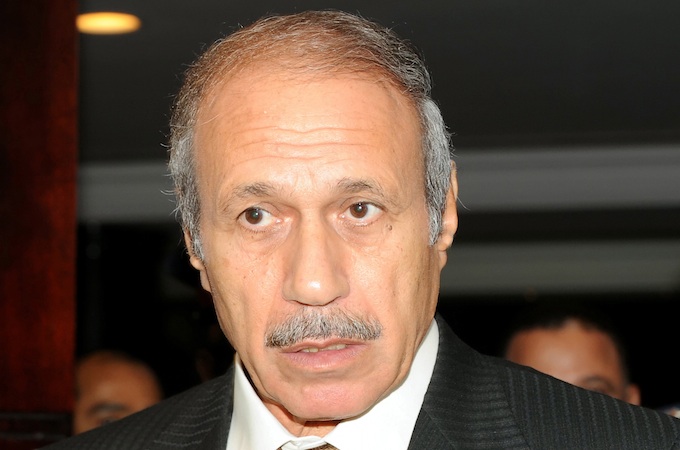 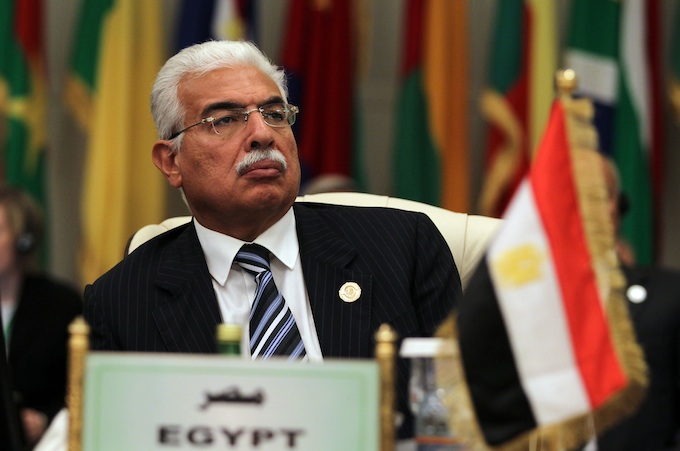 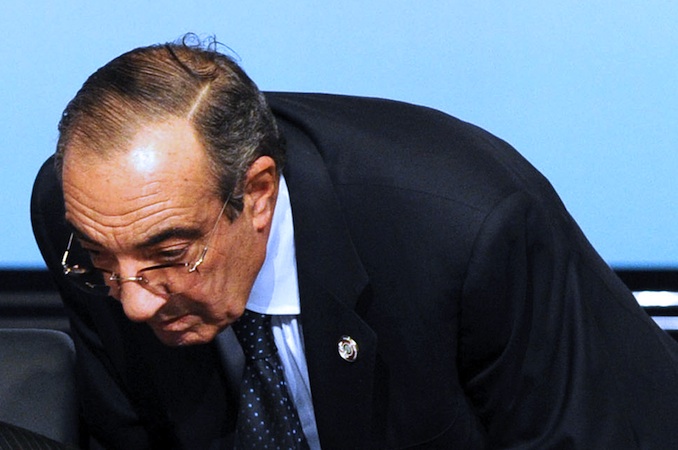 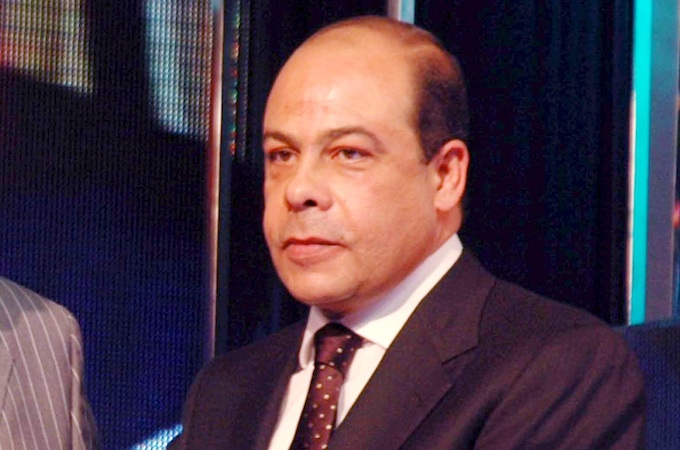 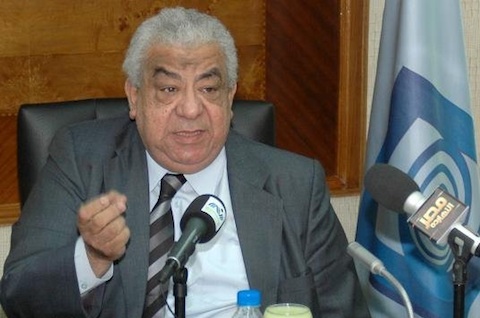 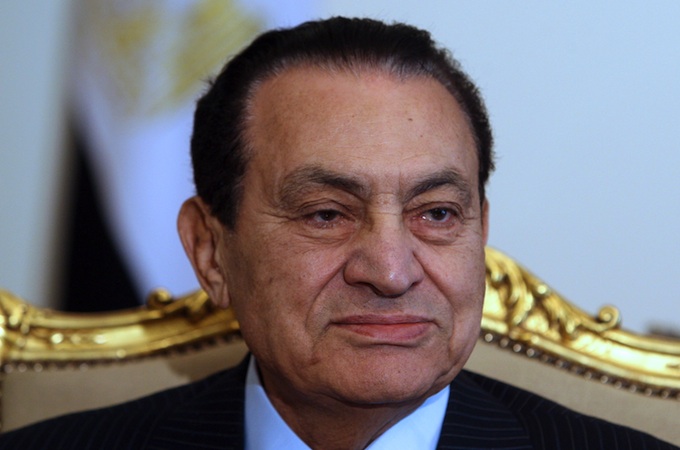 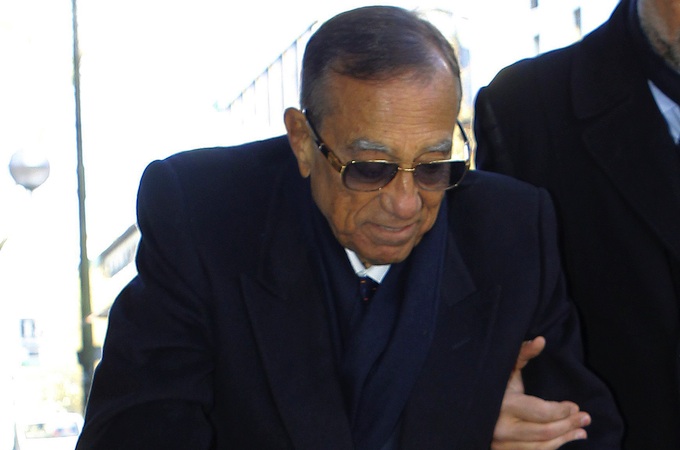 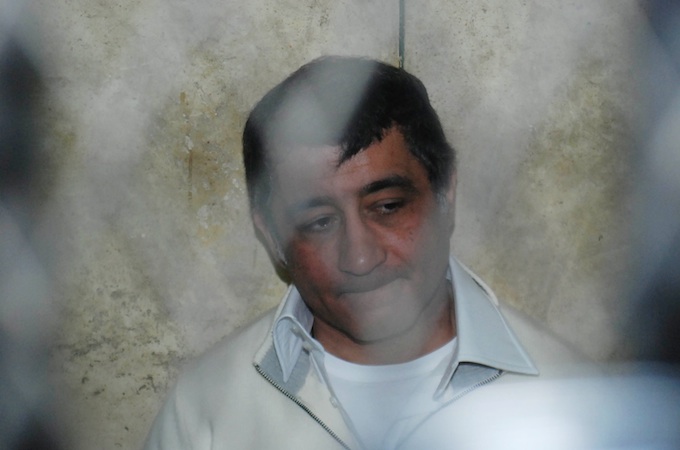 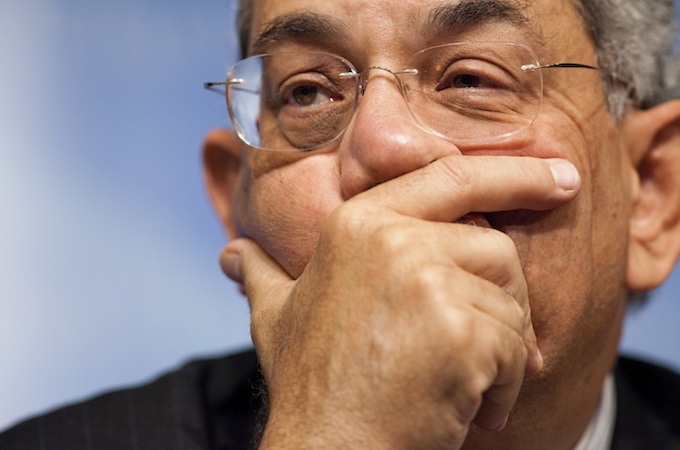 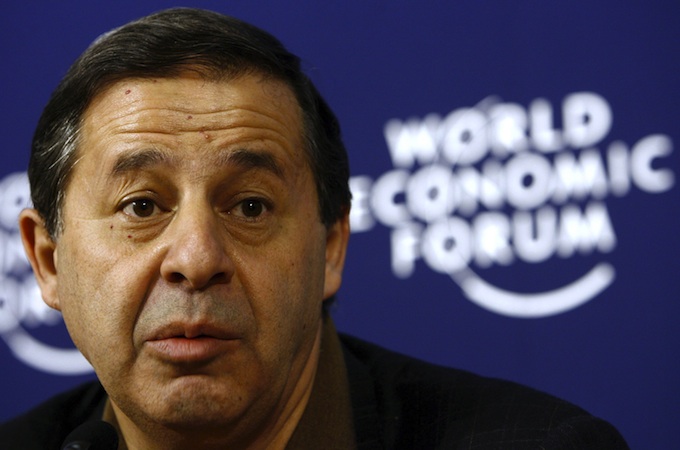 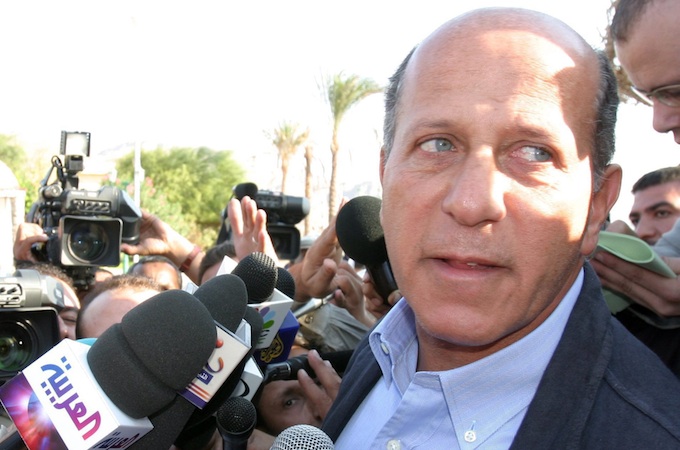 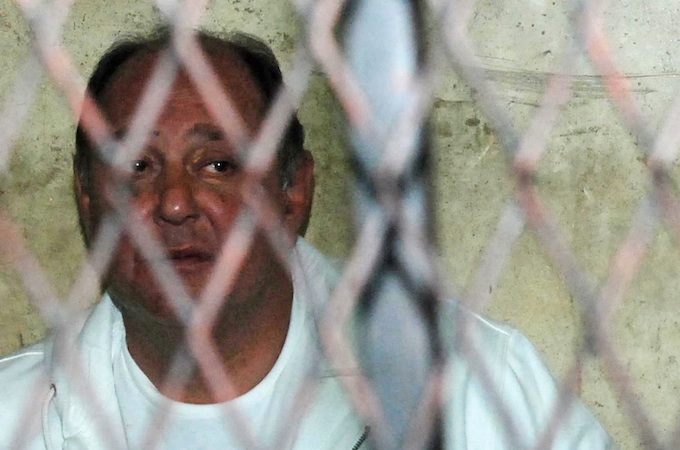 The former Egyptian president was charged in May with murdering protesters during the revolution, a charge which could have carried the death penalty.

His trial began in August; he appeared in the dock alongside his two sons, Gamal and Alaa, as well as his former interior minister, Habib al-Adly. He pleaded not guilty, telling the judge he denied all of the charges against him.

He was finally convicted in June, sentenced to life in prison for complicity to murder – though, notably, not for directly ordering the murders of protesters – but was acquitted of corruption charges.

Mubarak was also convicted, along with his former prime minister Ahmed Nazif, of “damaging the economy” by shutting down mobile phone and Internet services during the revolution. He was fined 200 million pounds.

Sons of Hosni Mubarak
Charges: Corruption
Status: Acquitted on one count; awaiting trial on another

Gamal, Mubarak’s younger and more politically-involved son, was the deputy secretary-general of the National Democratic Party. Many Egyptians believed he was being groomed to succeed his father. Alaa kept a lower public profile; he presided over a range of business interests, but seemed to have little interest in politics.

Both men were accused of using their father’s position to enrich themselves. They were acquitted in June; the judge said he believed the prosecution’s case, but the alleged corruption happened more than a decade earlier, so the statute of limitations had lapsed.

Prosecutors also announced last week that they would charge the Mubarak sons with stock market fraud.

The once-feared head of Mubarak’s security services has faced a range of criminal charges.

The most serious was that he directed police to fire live ammunition at protesters during the revolution, a charge which could have carried the death penalty. He was convicted in June, alongside Mubarak, and sentenced to life in prison.

Al-Adly has already been convicted of corruption for selling a piece of land in a police compound at above-market values. And he was convicted and fined, along with Ahmed Nazif and Youssef Boutros-Ghali, for profiteering from a contract to import new license plates.

Mubarak’s longtime prime minister was regarded by many in the international business community who liberalised the Egyptian economy.

But he was viewed by many Egyptians as corrupt, and the courts agreed: He was convicted in July of profiteering from a deal to import new license plates; Nazif, along with two other ministers, were fined 92 million pounds ($15 million). The prime minister also received a one-year suspended sentence.

Nazif was also one of three government officials fined nearly $100 million for cutting off mobile phone and Internet services during the revolution in January 2011.

Rachid was convicted in September of conspiring with business tycoon Ezz Steel to illegally sell steel licenses. Prosecutors said that Rachid granted Ezz free licenses for some of his factories. Rachid was sentenced to ten years in prison and fined 1.4 billion pounds ($230 million).

It’s unclear where Rachid is hiding: Egyptian news reports have variously placed him in Qatar, Dubai, and the United Kingdom. Interpol has issued a red notice for the former trade minister.

The former finance minister was regarded as one of the most corrupt figures in Mubarak’s regime.

He was convicted in June of squandering public funds. Boutros-Ghali gave friends and associates nearly 100 cars owned by the ministry, and kept the other six for his own personal use; the cars had a total value of nearly $6 million. The court also found him guilty of stealing computers, printers and other equipment to use in his 2010 parliamentary campaign. He was sentenced to 15 years in prison on each count.

He was also convicted, along with Habib al-Adly and Ahmed Nazif, of profiteering from a deal to import new license plates, and sentenced to ten years in prison.

Boutros-Ghali is currently believed to be living in London, which has not arrested or extradited him, even after Interpol issued a “red notice” for the former finance minister.

Azmi, a lifelong functionary in the ruling National Democratic Party, rose through the ranks and was eventually appointed Hosni Mubarak’s chief of staff in 1989.

He was charged with corruption last year; prosecutors said he had “accumulated wealth beyond what he could have earned” from his official salary, including several properties and vacant plots of land. The total value of his holdings was allegedly more than 42 million pounds ($6.9 million).

Azmi was convicted in May, sentenced to seven years in prison, and fined 36 million pounds ($6 million). His wife was also fined as part of the verdict. And his brother-in-law, Gamal Halawa, was sentenced to a year in prison for tax evasion; prosecutors said he used his ties to Azmi to avoid paying taxes on his properties.

Al-Maghrabi was convicted in May of selling land at below-market values to businessman Mounir Ghabbour.

One of Ghabbour’s companies, the Sakkara Tourism Investment Company, acquired an 18-hectare plot of land. He also used state funds to reroute power lines around that plot of land, saving Ghabbour about 72 million pounds ($12 million).

Al-Maghrabi was convicted of wasting public money, sentenced to five years in prison, and ordered to repay the 72 million pounds. Ghabbour was handed a one-year suspended sentence and a fine.

Al-Sheikh was tried alongside Anas al-Fekki, the former information minister. He was convicted of squandering about $1.6 million in public funds by paying inflated prices for television soap operas.

The trial was contentious: Supporters threw bottles at the judge and tried to attack him after he read the verdict.

Mubarak’s chief propagandist was a particularly reviled figure in Egypt; his removal was one of the demands of Egypt’s revolutionaries.

He was acquitted in July, along with former finance minister Youssef Boutros-Ghali, on charges of wasting some $6 million in public funds on political propaganda for the National Democratic Party.

But he was convicted in September on another count of wasting public funds: Prosecutors charged that he gave away the broadcasting rights to Egypt’s premier football league, costing the state nearly 2 million pounds ($300,000). The free licenses were granted to satellite channels run by politically-connected businessmen.

The 79-year-old Salem, one of Egypt’s best connected (and most secretive) businessman, has been jailed in Spain pending a possible extradition to Egypt. Spanish authorities have also frozen more than $45 million of his assets.

He is accused of bribing Mubarak, giving him four villas in Sharm el-Sheikh in exchange for large tracts of state-owned land on the Sinai. Salem denied the charges in a television interview, and said he sold the villas to Mubarak for 2 million pounds apiece. (Some reports suggest their actual value is closer to 40 million pounds.)

Salem and Sameh Fahmy, the former petroleum minister, were convicted of profiteering from the Egypt-Israel natural gas pipeline: A Salem-owned company, East Mediterranean Gas, purchased natural gas at below-market rates, then sold it to an Israeli firm at a substantial markup. Salem was convicted in October and sentenced to seven years in prison for laundering more than $2 billion.

And in yet another case, a court in Giza convicted Salem and his son Khaled of illegally acquiring land in Luxor. He was sentenced to 15 years in prison.

Ahmed Ezz used his political connections to secure a virtual monopoly over the Egyptian steel industry.

The court sentenced Ezz to ten years in prison, and fined him 660 million pounds ($110 million); that fine was also imposed on Amr Assal, the former head of Egypt’s industrial development authority. Ezz’s companies were ordered to forfeit their illicit licenses.

Garana was convicted of corruption in May in connection with a land sale to two politically-connected developers: He sold them large tracts of land in the Red Sea resort town of Ain Sokhna for just $1 per square metre, well below market value. Garana and the businessmen were convicted of wasting $51 million in public funds.

His defence attorneys argued that Garana was simply following instructions from above, and urged the court to prosecute Mubarak, former prime minister Ahmed Nazif and other officials as well.

He was also convicted in September of illegally issuing licenses to tourism companies owned by his friends, and sentenced to three years in prison.