Zimbabwe’s president, Robert Mugabe, has acknowledged the country’s history of political violence, calling his nation to move on from the past.

Mugabe made the remarks as he addressed thousands of people during independence day celebrations in Harare on Wednesday.

“We are going to elections and troubles have already started. This is happening not only parties versus parties but within parties as well,” he said in his speech at Harare’s biggest stadium.

“All our political leaders should encourage their supporters to promote the spirit of peace and tranquillity through social dialogue.”

The speech to mark Zimbabwe’s 32nd anniversary of independence from Britain was the first public appearance by 88-year-old Mugabe since he returned from Singapore last week.

That trip sparked new worries about his health, amid reports that he has advanced prostate cancer.

Mugabe has repeatedly brushed off concerns about his health.

The government said he went to Singapore to arrange post-graduate studies for his daughter Bona, but his near-monthly visits to the city-state have raised suspicions he is receiving medical care there.

Mugabe’s health is a crucial factor in Zimbabwe’s politics, as he has no clear successor.

His ZANU-PF party has already endorsed him as its candidate for the next polls.

But he appeared strong as he delivered his speech before cheering supporters under a hot sun, and inspected a guard of honour on the football pitch.

Mugabe again called for the West to remove a travel ban and arms embargo imposed on himself and his close associates, saying they affected Zimbabwe’s economic development.

“We call upon those responsible for imposing these sanctions to urgently remove them unconditionally,” he said.

Mugabe bemoaned delays in the completion of the drafting of a new charter meant to pave way for new elections.

“The principals of the global political agreement are worried and we are now demanding that the draft constitution be delivered to us,” he said.

Mugabe insists elections to choose a successor to his power-sharing government with Morgan Tsvangirai, prime minister, should be held this year.

Tsvangirai wants elections only after the constitution that is supposed to usher in reforms to ensure a free and fair vote, as required under the three-year-old coalition deal.

Every election since 2000 has been marred by violence and intimidation, mainly against Tsvangirai supporters.

After winning a first-round presidential vote in 2008, Tsvangirai withdrew from the run-off citing the deaths of more than 200 of his supporters and the displacement of thousands more. 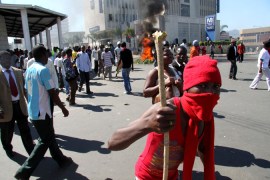 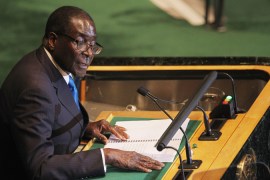 The indigenisation of Zimbabwe 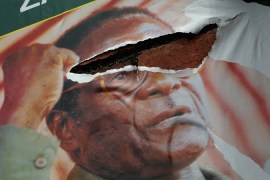