A series of bomb blasts have killed at least nine people and wounded at least 50 in Thailand’s main town in the southern area of Yala, according to military officials.

Conflicting accounts from officials on Saturday said that Saturday’s attacks involved both car bombs and bombs hidden on motorcycles.

“There were three bombs that exploded, the first is a car bomb and the second and third bombs were hidden in motorcycles,” said Colonel Pramote Promin, an army spokesman told the AFP news agency on Saturday.

Dethrat Simsiri, the region’s governor, said three explosions took place within a 100-metre radius over a period of 10 minutes in the commercial district of Yala municipality. Thai media reported that all three blasts were vehicle bombs.

Several shop houses near the blast sites were on fire and many parked cars and motorcycles were damaged by the powerful explosions.

A Yala city policeman said more than 50 people had been taken to hospital with injuries.

“The bombs went off about 10 minutes apart,” he said.

Thailand’s far southern area which borders Malaysia has experienced political instability since 2004, claiming thousands of lives, both Buddhist and Muslim, with near-daily bomb or gun attacks.

Rebels say they are fighting against a long history of perceived discrimination against ethnic Malay Muslims by governments in the Buddhist-majority nation.

One of the region’s deadliest incidents occurred on October 25, 2004, when  seven people were shot dead as security forces broke up a protest in the town  of Tak Bai, and 78 more suffocated or were crushed to death in trucks while being transported to a detention centre. 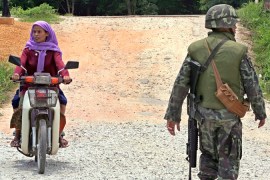 Restoring harmony between Bangkok and the Malay Muslims of South Thailand

Peace can only come to South Thailand if freedoms and human rights are extended to all the country’s citizens.