Abdullah al-Senussi, who is reported to have been detained in Mauritania, was the right-hand-man and brother-in-law of deposed Libyan leader Muammar Gaddafi, who was deposed from power and eventually killed in a nine-month uprising last year.

He was the director of much-feared military intelligence, and was entrusted to quash the rebellion against Gaddafi’s rule last year.

In June last year, Luis Moreno-Ocampo, the International Criminal Court’s chief prosecutor, applied for arrest warrants for Senussi as well as for Muammar Gaddafi and his son Saif al-Islam, over alleged crimes against humanity.

The ICC indictment accuses Senussi of being an “indirect perpetrator of crimes against humanity of murder and persecution based on political grounds” committed in the eastern opposition stronghold of Benghazi in February last year.

“(Senussi), once instructed by Muammar Gaddafi to implement the plan of deterring and quelling civilian demonstrations against the regime in Benghazi… directly instructed the troops to attack civilians demonstrating in the city,” it says.

The 62-year-old’s past history includes a suspected involvement in the Abu Selim prison massacre.

Senussi was also blacklisted by the US Treasury Department as part of sanctions against senior Libyan officials during the nine-month uprising.

He was one of several Libyan officials who were convicted, in absentia, in a French court in 1999 over the
bombing of a French airliner. The plane came down in Niger the previous year, killing all 170 people on board. Senussi has denied his involvement.

Senussi has been a largely elusive figure since the revolt against Gaddafi began.

He was reported to have defected with then-foreign minister Moussa Koussa soon after the revolt against Gaddafi began, but those reports were later denied.

A US national security official said US government agencies were aware that Senussi, together with Saif al-Islam, Gaddafi’s son, had been involved in making some peace overtures after the start of the revolt.

In November, Libya’s new rulers announced that Senussi had been captured at his sister’s home in the southern Libya region of Al-Guira where he had apparently been hiding, but those reports also proved misleading.

His fall puts an end to some of the most brutal figures of Colonel Gaddafi’s regime.

Senussi is a member of the Magarha tribe, believed to be the second-biggest in Libya.

Abdel Basset al-Megrahi, the man convicted for helping blow up Pan Am flight 103 over the Scottish town of Lockerbie in 1988, is a member of the same tribe.

According to US embassy cables published by WikiLeaks, Senussi asked US diplomats to help smoothe the way for al-Megrahi’s release from a Scottish jail, but they demurred. Al-Megrahi was released in 2009 and returned home to a hero’s welcome. 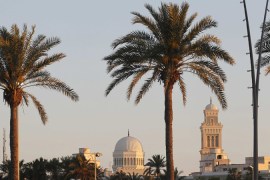