Russia’s presidential election on March 4 comes against the backdrop of the biggest demonstrations against the Kremlin since the fall of Communism.

While the issue of widespread allegations of fraud and vote rigging in December’s parliamentary poll has taken centre stage, other issues such as the country’s chronic demographic problems and continuing inability to diversify its economy away from its reliance on raw materials are also being debated.

Endemic corruption is another major theme, with the opposition arguing that the problem is a direct consequence of the policies of Vladimir Putin, who will be running for president for a third term, in strengthening the powers of the state and cracking down on any evolution of the country’s civil society.

While Putin is widely expected to win the election, most attention is on whether he can secure a victory in the first round by taking more than 50 per cent of the vote.

The result is being closely watched overseas, where December’s contested election moved commentators such as John McCain, the influential US senator, to warn Putin via twitter: “Dear Vlad (Putin), The ArabSpring is coming to a neighbourhood near you.”

For his part, Putin has tried to discredit the protesters by accusing their leaders of being agents of the US, plotting to bring about revolution in the country.

In the run-up to March’s poll, demonstrations calling for free elections have continued, with organisers declaring tens of thousands in attendance at February rallies in Moscow, held in freezing conditions.

If no candidate takes 50 per cent plus one of the votes, the two candidates with the most votes will face a run-off three weeks later.

Putin has already warned voters that: “A run-off would unavoidably be linked to the continuation of a struggle and the destabilisation of the political situation.”

Four other candidates are running for office, Mikhail Prokhorov, an independent, Gennady Zyuganov of the Communist Party, Vladimir Zhirinovsky, the leader of the nationalist Liberal Democrats and Sergei Mironov, a leading member of the left-wing A Just Russia party.

Some leading figures in the opposition movement, such as Alexei Navalny, an increasingly popular blogger, activist and anti-corruption campaigner, have said they will not run in the election because they expect that the vote will be rigged.

Following years of speculation as to whether he would run against for president, Dmitry Medvedev declared on September 24 that he would back Putin for the top job.

On the same day, Putin accepted Medvedev’s offer and backed him for the position of prime minister should he win the election.

The  men had previously switched jobs in 2008 after Putin’s second term as president expired and the term limit prevented him from running again.

Much of the anger directed at Putin in recent months has sprung from Medvedev’s admittance that the decision to swap roles had been taken years ago.

The presidential term has been newly extended from four to six years, while the president may still only serve two consecutive terms in office.

Putin is still widely expected to win in the first round with his United Russia still the largest and best organised party in the country.

In a phrase that has caught on across Russian, Navalny has described United Russia as “the party of crooks and thieves”.

A major issue in the election is the country’s demographic problem, with experts warning that if existing trends continue the present population of about 143 million will plummet to about 107 million people by 2050.

There are many reasons for the decline, including poor environmental conditions, a lack of health and safety regulations, deteriorating healthcare in general and pre-natal care in particular.

The single biggest cause, according to a 2009 article in The Lancet, a respected UK medical journal, is alcoholism, mainly among men whose average life expectancy in the 50s.

Putin has promised that families with more than three children would receive housing priorities and a special allowance of about $250 for each child per monthly, while other state benefits would make it easier for women who work to find care for their children during the day.

Zhirinovsky has put forward options such as reducing the number of abortions and that men be allowed to legally more than one wife in order have more children.

The candidates will be campaigning on a range of issues, ranging from corruption and pensions to immigration and healthcare.

All the candidates have pledged to tackle corruption which is seen as endemic in Russia, entering into every area of life from  bribery to the seizure of private assets.

As recently as last month, Putin admitted that his government was tackling corruption without success, describing it as “systematic”.

In an interview on January 30, with Vedomosti, one of the few newspapers to have repeatedly criticised Putin, he said: “The costs [of bribes] for a business vary, you pay more or less depending on how well disposed certain people within the state mechanism are towards you.”

Much of the political and financial power in the Kremlin is considered to be in the hands of the Siloviki, a group of people with security backgrounds who control many state activities.

The group is seen as loyal to Putin, himself a former KGB officer, and protesters say until this power base is removed corruption will continue.

The rapid privatisation of the Russian economy begun by Yeltsin and continued by Putin process has handed over many state-owned companies to a small band of oligarchs and left the average Russian with little. 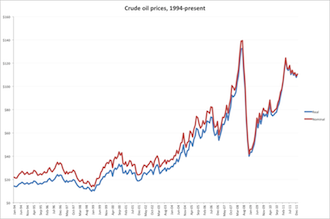 World crude oil prices have cooled off somewhat after spiking in 2007 and 2008, hurting the Russian economy [CLICK TO ENLARGE]

The recent global economic downturn hit the economy hard, particularly due to Russia’s dependence on the export of its raw materials.

At the beginning of 2009, oil prices dropped to $40 per barrel, leaving the country close to economic collapse.

In the same article in Vedomosti, Putin said that Russia must diversify its economy and so that it is not so reliant on such resources.

Putin wrote : “Global sales of gas, oil, metals, timber and other raw materials and low value-added products account for over 25 per cent of Russia’s GDP.

“It has become commonplace to speak about a resource-based Russian economy.

“Having an economy that cannot guarantee us stability, sovereignty and prosperity is unacceptable for Russia.

“We need a new economy with competitive industries and infrastructure, a developed services sector and effective agriculture  – an economy based on modern technology.”

Following December’s disputed results, perhaps the biggest issue in the election is free and fair elections.

The Organisation for Security and Co-operation in Europe (OSCE), one of the international bodies which monitored the vote, said the vote was marked by frequent procedural violations and instances of apparent manipulations, including the stuffing of ballot boxes.

United Russia won the poll with 49 per cent of the vote, taking 238 seats or 53 of the seats in the Duma, the country’s lower parliament.

Rallies in support of Putin, who said there should be no re-run of the election, have also been held, the most recent on February 23.

Putin has said the elections were an accurate reflection of the people’s will and has refused to call a re-run.

He has sought to portray the mass rallies directed against his government as proof of a growing civil society in Russia and a positive development.

Following the December election, Putin ordered the installation of web cameras at all polling stations to film voting for the presidential poll and the introduction of see-through ballot boxes.

Critics point out that much of the manipulation took place after the voting and argue that such moves will make little difference to the final result.

Under Russia’s electoral laws, independent candidates such as Prokhorov had to submit two million signatures to be able to stand. 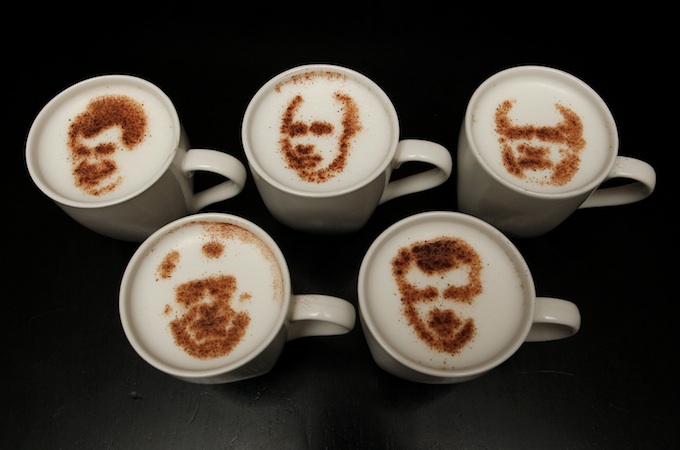 Click on a candidate’s face above for a profile

The other candidates from the four officially recognised parties were not required to submit signatures.

No less than eleven candidates were denied registration by the Central Election Committee (CEC) for various technicalities.

Prokhorov, who is running as an independent, is the billionaire owner of the New Jersey Nets basketball team.

Valued at $18bn in 2011 by Forbes magazine, he made his money in metals and finance, and is rated the third-richest man in Russia.

He has been criticised as a Kremlin stooge whose candidacy is aimed at dividing the opposition’s share of the vote, an accusation he denies.

Zhirinovsky, the controversial founder and head of the Liberal Democratic Party of Russia (LDPR) is standing for office for a fifth time.

An ardent nationalist, he has made statements ranging from support for retaking Alaska back from the US to the deportation of all Chinese from Russia’s Far East.

His past campaigns have included offers of free vodka and underwear.

The LPDR took 12.5 per cent of the seats in December’s parliamentary election.

Zyuganov, the Communist Party’s candidate, is running for the candidacy for the fourth time. In the last election, in 2008, he received 18 per cent of the vote.

He has led the party Communist Party since 1993 and called for the “re-Stalinisation” of Russia in December, 2010.

Sergei Mironov, of the A Just Russia party, is probably the least well known of the candidates.

Born in Pushkin, he served as an airborne soldier in the Soviet army, later entering politics and rising to his present position as chairman of Russia’s upper house.

A candidate in the 2004 presidential election, in which he won less than one per cent of the vote, he was quoted as saying: “We all want Vladimir Putin to be the next president.

There is little doubt that the mass protests that have enveloped Russia over the last few months have had a profound effect on the country’s political landscape.

Navalny has advised voters to cast their ballots for any candidate other than the prime minister.

If the election does go to a second round, there is no doubt Putin’s authority would be severely damaged.