The broadcaster quoted the health ministry as saying that 28 people were killed and more than 200 others wounded, including soldiers and civilians.

Mangled, bloodied bodies as well as severed limbs lay on the pavement outside the targeted buildings, as shown in live footage on Syrian television

Arif al-Hummoud, a commander of the Free Syrian Army, a name used by various armed groups, told Al Jazeera that opposition fighters had carried out an attack but were not responsible for the bombings.

He said the security buildings were heavily guarded by security forces and that it would be “impossible” to launch attacks such as Friday’s blasts.

The UK-based Syrian Observatory for Human Rights said 30 people had been killed in explosions in the neighbourhoods of Sakhur and Marjeh and the Dawar el-Basel roundabout.

The city has seen only occasional protests. Still, hours after the explosions, hundreds of protesters marched in several Aleppo neighbourhoods after Friday prayers.

Security forces opened fire on protesters, killing at least six people, according to the Local Co-ordination Committees. The activist network said 12 people were killed in the province and at least 23 more in other parts of the country.

In the flashpoint city of Homs, activists reported that tanks were massing outside opposition neighbourhoods, a week after government forces started continuously shelling the city. Troops were reportedly also entering the neighbourhood if Inshaat, detaining several residents.

“The army seems determined to conquer the opposition neighbourhoods – the Free Syrian Army and some other armed opposition groups have been in control of those streets for some weeks now,” she said.

Amin said that while shelling stopped on Friday morning, the areas were “besieged by the army and people are calling for blood and bread”.

“Very little food is left and little medical aid is being provided to them”.

Human Rights Watch said in a report on Thursday that makeshift hospitals in besieged opposition areas were overflowing with dead and wounded from government bombardments and snipers.

The US-based rights watchdog said more than 300 people had been killed since the offensive against opposition neighbourhoods was launched last Friday.

In the latest example of how the cricis in Syria is affecting neighbouring Lebanon, at least one person was reportedly wounded in gunfire and grenade blasts in the Lebanese city of Tripoli, where Sunni Muslim and Alawite communities are divided over the Syrian issue.

Armed men have deployed heavily in two rival neighbourhoods, one group supporting and the other opposed to President Bashar al-Assad’s leadership in Syria. 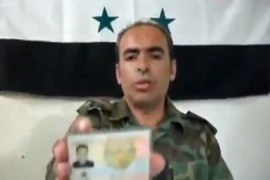