Egyptian police have fired tear gas at opposition protesters demonstrating against Egyptian President Mohamed Morsi’s drive to hold a snap referendum on a controversial draft charter, as the country plunges deeper into crisis.

Live television footage showed that some protesters broke through police lines and got too close to the presidential palace late on Tuesday night.

Al Jazeera’s Rawya Rageh, reporting from Cairo said: “We saw thousand of people surrounding the palace on all four corners, outnumbering the police and getting close to the presidential walls.

“Opposition has announced there’s going to be a sit-in outside the palace.

“The message coming out of here is that the president has failed to prove to Egyptians that he is the president of all of Egypt, as opposed to a leader in the Muslim Brotherhood group.

“Morsi is preparing for the referendum, he is under a lot of pressure from the opposition, but he does not seemed to be phased by the protests”.

Thousands had taken to the streets waving Egyptian flags, chanting for the downfall of the president and denouncing the Muslim Brotherhood, from which Morsi emerged, for having “sold the revolution” that toppled Hosni Mubarak last year.

The strikes were part of a planned campaign of civil disobedience that could bring in other industries.

‘Stand up to tyranny’

Also on Tuesday, at least eight influential daily newspapers, a mix of opposition party mouthpieces and independent publications, suspended publication for a day to protest against what many journalists see as the restrictions on freedom of expression in the draft constitution.

The move, according to independent daily Al-Tahrir, was aimed at “standing up to tyranny”.

The country’s privately owned TV networks are planning their own protest on Wednesday, when they will blacken their screens all day.

A November 22 decree issued by Morsi expanding his powers and subsequent announcement to hold a referendum on a draft constitution rejected by liberals have sparked strikes and deadly protests.

The charter has become the focal point of a political and ideological battle in Egypt between the Muslim Brotherhood and their Islamic allies and the largely secular-leaning opposition.

“The country is deeply divided over Morsi’s legitimacy, the opposition are saying they are not against his election which was legitimate, but his actions and decrees are not legitimate,” said our reporter.

Morsi’s decision has not only placed his decisions beyond judicial oversight but also barred any judicial body from dissolving the panel that drafted and approved the new constitution, sparking a conflict with the country’s judges.

As he faces his worst crisis since taking office in June, Morsi said the measures are aimed at ending a tumultuous transition following the popular uprising that toppled Mubarak in early 2011.

But his opponents have accused him of choosing the same path of autocracy that finally cost Mubarak his presidency. 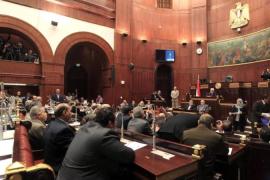