From the Mayan ruins of Chichen Itza to a small town in southern Italy and India’s holy city of Varanasi, doomsday believers flocked to global hot spots to count down the clock to December 21, the supposed date that the world “ends”.

Accompanying the believers are curious tourists, people wanting to make money out of the event and those who are just looking for a good excuse to party.

In Mexico’s Mayan heartland, spiritualists prepared white clothes, drums, conch shells and incense in the darkness ahead of the sunrise on Friday, when they believed the 5,125-year cycle in the Mayan calendar would end.

But no one was quite sure at what time the Mayas’ 13th Baktun would officially end on this December 21. Some think it already ended at midnight on Thursday. Others looked to Friday’s dawn in Yucatan state, the Mayan heartland. Some had later times in mind.

As Friday’s dawn began sweeping around the globe, however, there was no sign of an apocalypse.

Indeed, the social network Imgur posted photos of clocks turning midnight in the Asia-Pacific region with messages such as: “The world has not ended. Sincerely, New Zealand.”

Still, that did not stop visitors from converging in the southern Italian town of Cisternino in Puglia, which one Indian spiritualist had predicted would survive the cataclysm.

Cisternino’s status as a safe haven has grown out of an apparent prediction by Babaji, Indian guru Shri Herakhan Baba who revealed that “Cisternino will become an island” once the world comes to an end.

Hotel bookings in the Puglia town have reportedly gone up compared to the same period last year, and the mayor of the town, Donato Beccaro, said he was prepared to greet the peculiar tourists.

A large party was organised for Friday, with hot-air balloons and music in the main piazza.

Threatened by the rumours of doomsday, devotees and tourists also thronged to India’s holy city of Varanasi to take shelter and offer prayers.

“People are coming to Varanasi because they believe Varanasi is indestructible. Even on doomsday it won’t be destroyed,” said Kishore Nath, a Hindu priest.

In Russia, a museum was offering salvation for $1,500 inside former Soviet dictator Josef Stalin’s underground bunker in central Moscow, with a 50 percent refund if nothing happened. The small museum sold out all 1,000 tickets.

In Beijing, a coffee shop was also making light of the phenomenon handing out mock tickets to Noah’s Ark.

The ticket is designed like a boarding pass, with a picture borrowed from the Hollywood movie “2012” on the front, and boarding details printed on the reverse.

“We hope we can make use of this to have a kind of interaction with our customers. Just trying to bring some laughter to people, we don’t have to take it seriously,” the shop’s owner Sun Yu said.

Sun and his staff had made some 200 tickets for their customers.

Apocalypse predictions have been widely discussed in China, thanks in part to the success of the Hollywood film “2012”, which depicted a Chinese-built apocalypse ark and set box office records in the world’s most populous country.

Earlier, Chinese authorities arrested close to 1,000 members of a supposed Christian-affiliated cult for distributing pamphlets about the end of the world. 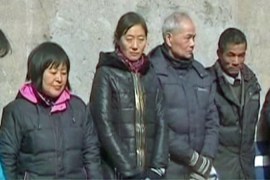 Thousands of people, including members of a banned group, held for spreading rumours that end of the world is imminent. 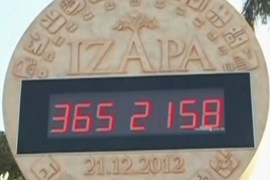 Experts say giant commercial industry has been built around ancient prediction that world will end in 2012.