Egyptian President Mohamed Morsi has announced plans for a December 15 public referendum on a draft constitution after receiving a copy of the document.

He called for the vote in a speech on Saturday night before members of the constituent assembly, the 100-member panel that drafted the controversial document.

Morsi praised their work, describing it as another step toward “fulfilling the goals” of the revolution that toppled longtime president Hosni Mubarak last year.

The president thanked the nearly two dozen members of the assembly who quit in recent weeks. “Their work can’t be ignored,” Morsi said.

But many feel it has been with Liberals and representatives of the Coptic Church withdrawing from the deliberations and accusing the panel of pushing an Islamist agenda.

Morsi’s speech follows major protests in Cairo on Saturday, both for and against his presidency. The Muslim Brotherhood organised a major rally outside Cairo University, where protesters carried Egyptian and Saudi flags and posters of Morsi, with banners reading “Together [with Morsi] to save the revolution.”

Witnesses said hundreds of demonstrators were taken by bus from outlying governorates in the Nile Delta region. And a number of Muslim clerics in Friday sermons in the southern city of Assiut called the president’s opponents “enemies of God and Islam”.

Saturday’s demonstrations came a day after protests against the draft turned violent in the mediterranean city of Alexandria. 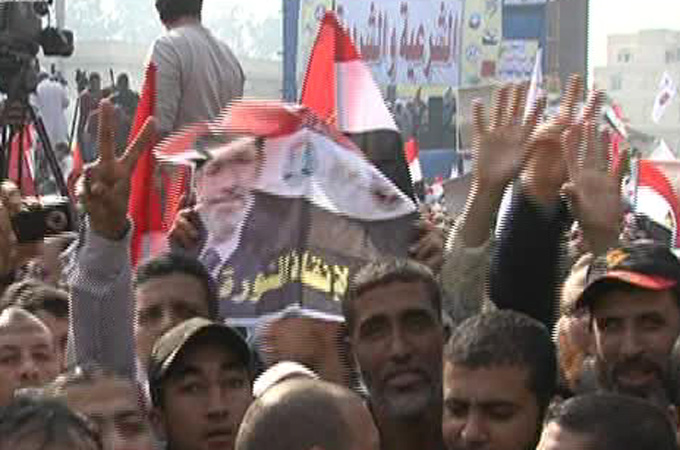 The demonstrators chanted “freedom, down with the constitutional establishment”, as riot police charged along the city’s streets and crowds of protesters surrounded police vehicles.

The protests were caused by the president’s decrees a week ago granting himself wide-ranging power to issue decrees which would not be subject to judicial review.

Elsewhere in the country, thousands took to the streets of the capital hours after the draft constitution was rushed through by the country’s constituent assembly (CA).

“Morsi stole the fruits of the revolution. He became the president after the election and we did not oppose that. But after that, he abandoned democracy and we found ourselves facing another autocrat, Morsi, the Muslim Brotherhood and Salafi,” one protester said.

“The smoke bombs, bullets, machine guns and the sacrifice of youth, it is a similar situation like in the days of Hosni Mubarak’s. Morsi doesn’t see people’s requests, listen to people’s ideas or care about the current situation. He is just another autocrat and the situation has not changed,” another protester said.

Morsi has promised that his new found legislative powers would end after the referendum.

“This constitutional declaration is temporary, and it will end once the people have approved the constitution,” he said.

At least three people have been killed and more than 600 injured during the nationwide protests since Morsi issued the decrees granting himself sweeping powers.