An Iraqi counter-terrorism official tells Al Jazeera that security forces have arrested the top al-Qaeda leader in Iraq and seized a list of names and locations of other operatives.

“We’ve spoken to an official in the counter-terrorism unit that actually arrested this man, and they maintain that he is the top al-Qaeda leader in Iraq, but they’re not releasing his name because they say they’re still interrogating him,” said Al Jazeera’s Jane Arraf, reporting from Baghdad.

“But what they do say is that he was arrested in Baghdad after a two-month long investigation tracking him, and that in addition to arresting him, they also seized the names and locations of other al-Qaeda operatives,” said our correspondent.

Samir al-Shuili, spokesman for a counter-terrorism unit confirmed that members of the unit infiltrated the Islamic State of Iraq, an al-Qaeda umbrella group, and that operatives on the list were from other Arab countries and Iraq was seeking the help of those countries in arresting them.

Robert Grenier, the former head of the CIA’s anti-terrorism centre, told Al Jazeera that officials had a good reason to withhold the name of the man they have detained.

“In counter-terrorism operations, as in military operations, the rule of thumb is that the first reports are never correct, so we may see a bit of that at work here,” said Grenier.

“Also, there are indications that along with this individual capture there may have been quite a quantity of other materials providing leads to other militants, perhaps in other countries, and so the people responsible for this may want to keep a lid on it for a bit until they’ve had a chance to follow up on some of those leads with cooperating countries.”

Iraqi media has been reporting that the man in custody is Abu Bakr al-Baghdadi, who was named head of the Islamic State of Iraq, an umbrella organisation of armed groups, two years ago after the killing of Abu Omar al-Baghdadi in a US air strike in 2010.

“It’s not known whether Abu Bakr al-Baghdadi, the man who is said to have taken over the al-Qaeda organisation here is actually Iraqi, or, in fact, even exists or is a composite of several people,” said Arraf.

“He has kept a very low profile, except for the regular bombings that have taken place [for which] the Islamic State of Iraq has claimed responsibility.”

“He has not come out with a lot of statements or videos. He has been, even by al-Qaeda standards, quite a shadowy figure,” our correspondent said, adding that the reports of al-Baghdadi’s arrest are yet to be confirmed. 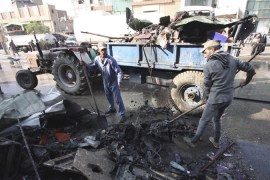 Shia worshippers and security forces targeted in bombings that killed 48 and injured many more across four provinces. 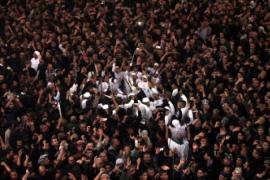 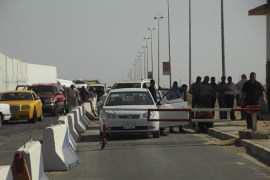 Islamic State of Iraq claims responsibility for jail break in Tikrit, amid reports of twin bombing in Baghdad.