Thousands of pro-government and opposition protesters have held rival rallies in Cairo for and against a controversial constitutional referendum proposed by Egyptian President Mohamed Morsi.

Leftists, liberals and other opposition groups called for Tuesday’s marches to the presidential palace to protest against the hastily arranged referendum planned for Saturday.

Al Jazeera’s Sherine Tadros, reporting from the anti-Morsi rally, said that the crowds in front of the presidential palace had “thinned out significantly” around midnight as people returned home.

Some of the protesters had managed to breach the concrete barriers intended to keep them away from the presidential palace.

The debate among the crowd seemed to be whether to vote “no” on the referendum or to boycott the vote entirely.

The centre-right Islamists who dominated the body that drew up the constitution, urged their followers to turn out “in millions” in a show of support for the president and his referendum.

Al Jazeera’s Hoda Abdel-Hamid, reporting from the pro-Morsi rally in the Nasr City neighbourhood, said speaker after speaker has been taking the stage, calling for the constitution to go through.

“For them, the constitution brings stability to the country and economic recovery. And a lot of people here will tell you that their lives have been at a standstill since the revolution back in 2011.”

Critics of the draft constitution say it disregards the rights of women and ignores personal freedoms.

The opposition, stubbornly calling for the referendum to be delayed, was still trying to decide late on Monday whether to boycott the vote or rally Egyptians to vote “no” to the draft.

Egypt’s political crisis began on November 22 when Morsi issued a decree expanding his powers, granting himself immunity from judicial oversight or challenge. The decree, which he later withdrew, sparked mass demonstrations.

The elite Republican Guard has yet to use force to keep protesters away from the palace, now ringed with tanks, barbed wire and concrete barricades, but a decree issued by Morsi late on Sunday gives the armed forces the power to arrest civilians during the referendum and until the announcement of the results.

The head of the Egyptian military called for a “national dialogue” to be held on Wednesday in an attempt to resolve the constitutional crisis, a military source said.

Defence Minister Abdel Fattah al-Sisi is calling for all sections of the people to convene a national dialogue at the
Olympic Village tomorrow,” the military source told Reuters.

The Egyptian president insists on holding the referendum on schedule, despite concerns over who will monitor the vote. Several groups of judges have said they will not oversee the referendum, as is customary for judges in Egypt.

Meanwhile, Egypt’s judges on Tuesday said that most will of them will not oversee vote on disputed constitution, although Tadros reported that “there are enough judges now to monitor the referendum”.

Judges of the nation’s administrative courts announced on Monday they were conditionally lifting their boycott of the vote, but they said their supervision of the process was conditional on bringing an end to the siege of the Supreme Constitutional Court by Morsi’s supporters.

Also on Tuesday, a vital $4.8bn International Monetary Fund loan to Egypt has delayed until next month, intensifying the political crisis gripping the country.

Leftist politician Hamdeen Sabahy, one of the most prominent members of the National Salvation Front opposition coalition, said Morsi was driving a wedge between Egyptians and destroying prospects for consensus.

“The road Mohamed Morsi is taking now does not create the possibility for national consensus,” Sabahy said.

If the constitution was passed, he said: “Egypt will continue in this really charged state. It is certain that this constitution is driving us to more political polarisation.”

Morsi’s decision on Saturday to retract a decree awarding himself wide powers failed to placate opponents who accused him of plunging Egypt deeper into crisis by refusing to postpone the vote on the constitution scheduled for December 15.

“We are against this process from start to finish,” Hussein Abdel Ghani, spokesperson of the National Salvation Front, said. 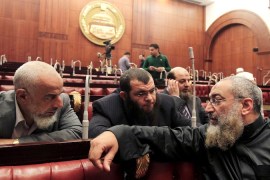 Background on the crucial December 15 vote on a new constitution, Egypt’s first in decades. 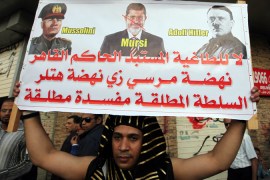