Just hours after a roadside bomb killed at least seven people near a Shia procession in Pakistan, the Taliban have claimed responsibility and vowed that more attacks will come.

Security forces were on high alert over fears of large-scale attacks on the minority sect across the country after an attack occurred on Saturday in the city of Dera Ismail Khan in Pakistan’s northwest.

The Pakistan Taliban claimed responsibility for the attacks in a telephone call to AFP news agency.

“We carried out the attack against the Shia community,” spokesman Ehsanullah Ehsan told AFP by telephone from an undisclosed location after the explosion.

He said the group had dispatched more than 20 suicide bombers across the country for attacks against the minority community.

“We have 20-25 fidayeen [suicide bombers] in the country to launch bomb blasts and suicide attacks,” Ehsan said.

“The government can make whatever security arrangements it wants but it  cannot stop our attacks.”

The area is a stronghold of al-Qaeda-linked extreme Sunni groups who regard Shias as non-Muslims and have stepped up sectarian attacks in a bid to destabilise Pakistan.

The bomb on Saturday morning was planted in a dustbin, the blast was powerful and heard several kilometres away,” said police official Siddiq Khan said.

City police chief Khalid Suhail said the dead were all children aged between six and 11 years.

“They were young boys.”

At least 18 people were wounded, including two police officials, he said adding that five of them were in serious condition.

Hardline Sunnis have threatened more attacks as the Shia mourning month of Muharram comes to a climax. More than a dozen people have already been killed this week observing Muharram commemorations.

Pakistan is suspending phone coverage in many cities this weekend during Ashoura, an important one in the Shia Muslim calendar, after a series of bomb attacks on Shia triggered by mobile phones.

Intelligence information indicates more attacks have been planned for the coming days in the capital city of Islamabad, Karachi and Quetta.

In Karachi, more than 5,000 police are expected to patrol the streets during the weekend,

Muharram marks the anniversary of the Battle of Karbala, where the grandson of the Prophet Muhammad and his family members were killed.

Pakistani intelligence officials say extremist groups led by Lashkar-e-Jhangvi have intensified their bombings and shootings of Shias in the hope of triggering conflict that would pave the way for a Sunni theocracy in US allied Pakistan.

The schism between Sunnis and Shias developed after the Prophet Muhammad died in 632 when his followers could not agree on a successor.

Emotions over the issue are highly potent in modern times, pushing some countries, including Iraq five years ago, to the brink of civil war. 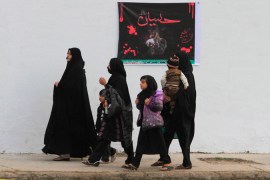 Officials say the move of suspending mobile phone use is necessary to stop terror attacks during Ashura processions. 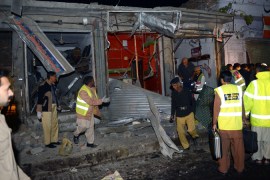 Series of bomb blasts kills at least 36 people, including Shia worshippers, in Rawalpindi, Karachi and Quetta.

Pakistan on edge after deadly blasts

Police accused of failing to provide protection after civilians are targeted by series of bombings.