Thousands of Argentina’s coast guard and military police have held unprecedented wage protests across the country after their pay was cut by 30 to 60 per cent.

Wednesday’s protests prompted the government to dismiss the heads of both services and force their top 10 commanders to retire.

The officers assured the country that basic coast guard and military police duties, particularly at border crossings, continued to be carried out despite the protests.

“We support democracy. This is not a political uprising.It’s nothing strange,” Fernando Parodi, military police officer, shouted into a bullhorn at a rally in front of the military police headquarters in Buenos Aires, where hundreds of olive-green clad officers chanted slogans in solidarity.

“We are workers, like any others, who need to support our families.”

A senior official of President Christina Fernandez’s government said the pay cuts were a mistake.

“The pay reduction was the result of a disastrous administrative action,” Juan Manuel Abal Medina, the cabinet chief of staff said, adding that most officers would receive their missing pay immediately.

Strikes over wages are common in Argentina, where inflation is running at more than 20 per cent annually, according to private economists.

But this was the first time in memory that uniformed Argentine military forces have taken to the streets over wages. Talks aimed at ending the dispute reached late into the night.

The government promised to revise the measure that prompted the protest and congress issued a statement calling on the striking officers to conduct the protests “within the confines of democracy”.

Spokesmen for the protesters, however, pledged to maintain their demonstrations until the government gives a written response to a 20-point list of complaints.

A year ago, just before winning her second term, she had 64.1 per cent popularity while campaigning on a promise to expand on the policy model of her late husband and predecessor, Nestor Kirchner, who increased the government’s role in the economy.

After winning re-election in October, Fernandez imposed new currency controls to halt capital flight and the investment climate also took a hit when her government seized a majority stake in the country’s No 1 energy company YPF.

With the economy of the grains-exporting country hampered by fallout from Europe’s debt crisis, slow demand from key trade partner Brazil and low soya output caused by a December-January drought, Argentines are increasingly worried about inflation.

So disputes over wages are likely to continue.

Tens of thousands from all walks of life rallied in major cities last month to protest against policies such as the de facto ban on buying foreign currency and a possible bid to overhaul the constitution so Fernandez can run for a third term. 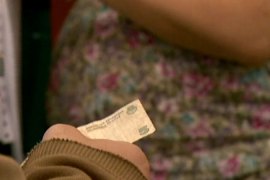 Recovery from the 2001 collapse of country’s banking sector is being threatened by global economic malaise. 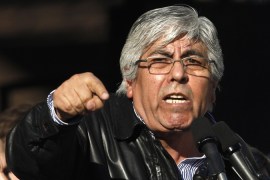 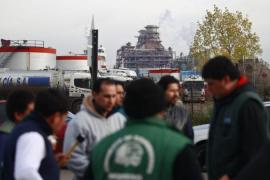 Strike over effects of high inflation labelled political by officials with union leader being probed for corruption. 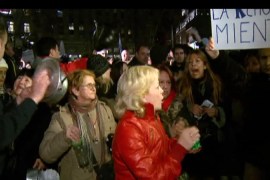 Anger as government buys up US dollars and tells people to start saving in country’s peso currency.