Police fired tear gas and beat protesters to force them out of a square they had occupied in an overnight sit-in in Nigeria’s northern city of Kano as part of demonstrations over soaring fuel prices, an organiser said.

Audu Bulama, one of the organisers of protests on Thursday, told AFP news agency, that about 300 people were wounded and 19 protesters arrested and later released.

“Around 1:15 this morning, the policemen assisted by local vigilantes fired tear gas on us, and when we refused to budge they used gun butts and cudgels to beat us while police vans ran into the crowd,” he said.

Police were not immediately available for comment, but a spokesman had told local radio that the protest was “illegal” as it did not have police approval.

“There are procedures to be followed by any group that wants to hold any kind of protests,” Kano police spokesman Magaji Majia said.

“The organisers of the protest must inform the police in writing, stating the date, time and venue of the protest, and secure police approval. Anything short of this is illegal.”

Nigeria has seen increasingly volatile demonstrations since the government announced the end of fuel subsidies on Sunday, causing petrol prices to instantly double in a country where most people live on less than $2 per day.

The Nigerian government held an emergency cabinet meeting on Wednesday, the second day of mass protests, after one person killed and more injured.

It resolved to provide hundreds of buses, among other resolutions, to cushion the impact of the subsidy, but, it did not back down from its decision to remove the subsidy.

The unions rejected this and called for an “indefinite” national strike and mass demonstrations to shut down sectors, such as oil production starting, on Monday if the government did not restore the fuel subsidy.

“If the government fails to do so, they direct that indefinite general strikes, mass rallies and street protests be held across the country with the first on Monday, 9th January, 2012,” the National Labour Congress and Trades Union Congress said in a joint statement released on Wednesday.

“All offices, oil production centres, air and sea ports, fuel stations, markets, banks, among others will be shut down.”

Ayo Johnson from Viewpoint Africa magazine told Al Jazeera that Nigerians are angry not only because of the subsidy cut but also because of the government’s decision-making process.

“The government would say it has consulted with people over the last two months, but, clearly, the consultation process has not been long enough,” he said.

“People [are angry] that they’re being penalised by a government who they’ve only recently put back in office.”

On Wednesday in Kano, hundreds of protesters shut down petrol stations and a mob threatened to burn a newspaper office before heading toward the state governor’s office when dozens of armed police and soldiers blocked them using trucks and vans.

Protests in Kwara state led to the death of at least one person on Tuesday, with a union claiming police shot dead a protester while authorities said a mob killed him.

In Lagos on Tuesday also, some 200 people marched on the highway and forced petrol stations to close.

A group of protesters in Kano threatened to burn down an office of the Daily Trust newspaper, whose coverage the protesters perceived as supportive of the government’s move, but police blocked them.

“They came in hundreds with the intent to set ablaze our office,” said Awwan Umar, Kano bureau chief for the newspaper.

Nigeria’s government says it will transfer $8bn it would save by canceling the subsidy to much-needed infrastructure projects.

Even so, Oladipo Fashina, a union leader, has described the move as “immoral and politically suicidal” and he has urged Nigerians to resist “with everything they have”.

Previous attempts to even tamper with the subsidy have been met with nationwide protests.

President Goodluck Jonathan announced on Monday evening that he had set up a committee to ensure that the savings from the subsidy’s end will be invested effectively to improve the lives of Nigerians.

The protests over rising fuel prices are only adding to Nigeria’s security woes. In its northern cities three bomb blasts again hit Maiduguri and Damaturu on Wednesday, just days after the areas were placed under a state of emergency by the president. 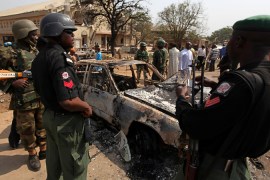 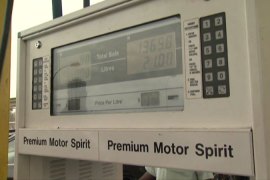 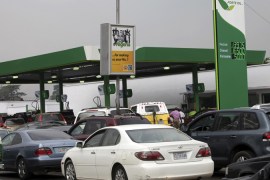