Taurag rebels have opened a fifth front, attacking a town in the northwest of the country, local and government officials have said.

The attack late on Thursday on the town of Lere comes after Taurag rebels took control over the north eastern town of Anderamboukane earlier in the day.

Moussa Ag Acharatoumane of the rebel National Movement for the Liberation of the Azawad, or NMLA, confirmed that his group had struck Lere. Earlier he had confirmed that the group had taken Anderamboukane, a town in the far
east, the fifth town in just one week
.
“Operations are on going in Lere. I haven’t got the confirmation yet from our officers on the ground that the town has been taken but I’m sure this is not long off,” he said. “We have mobile units that can attack all over the north of Mali. We are going to continue to attack towns across north of Mali.”

The fighting comes one week after the first major Tuareg offensive in three years after the recent return of fighters following the fall of Muammar Gaddafi in neighbouring Libya.

“We attacked Anderamboukane this morning… The Malian army is facing us,” said Moussa Salam, an MNLA spokesman, which is demanding autonomy for the nomadic desert tribe.

The rebel group says they are fighting for greater autonomy of the Azawad, an area of northern Mali that is the traditional home of the Tuareg.

Colonel Idrissa Traore, a spokesman for Mali’s armed forces, confirmed that there had been clashes between Tuareg rebels and the Mali army in Anderamboukane, but did not provide any further details.

The town of 3,000 people on the border of Niger is some 100km from Menaka, one of three towns attacked last week by Tuareg rebels.

“This new organisation aims to free the people of Azawad from the illegal occupation of its territory by Mali,” the organisation said in its first press statement in October 2011.

“Our aim is to flush out the Malian army in several northern towns,” Salam, the rebel spokesman, told the AFP news agency last week.

Soumeylou Boubeye Maiga, Mali’s foreign minister, said this week the army was in control of the three towns, and that the government was ready to listen to Tuareg concerns but would not accept violence.

“We have no problem with the Tuareg. They are Malian citizens like any other who can have expectations, aspirations and impatience,” Maiga said on the sidelines of a security meeting in Nouakchott.

“Some groups have demands which they try to make known through violence and with weapons… all these demands can be expressed without turning to violence.

“The Malian state is ready to listen but it will not accept actions which threaten the country’s security and stability. Mali’s unity and indivisibility is guaranteed.” 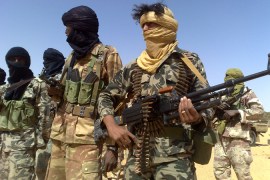