Turkey has threatened retaliatory measures against France following a French senate vote approving a bill that would outlaw denial that the mass killings of Armenians in 1915 constituted genocide.

Recep Tayyip Erdogan, Turkey’s prime minister, said on Tuesday the bill, approved by 127 votes to 86 in the French upper house, was a result of “racist and discriminatory” attitudes toward Turkey.

He said Ankara would impose unspecified sanctions against France if the bill is signed into law by French President Nicolas Sarkozy.

“We still have not lost our hope that it can be corrected,” Erdogan added.

Serzh Sarkisian, the Armenian president, has sent a letter thanking Sarkozy for the French senate’s approval of the bill.

“France has reaffirmed its greatness and power, its devotion to universal human values,” Sarkisian said in the letter to the French president.

“This day is exceptional for all those who are struggling for the protection of human rights, for the condemnation and prevention of crimes against humanity,” Sarkisian wrote.

He said it was “a historic day for Armenians all over the world”.

In a written statement following Monday’s vote, Turkey’s foreign ministry said: “We strongly condemn this decision which is… an example of irresponsibility.”

“Politicising the understanding of justice and history through other people’s past and damaging freedom of expression in a tactless manner are first and foremost a loss for France.”

The text will now be put to Sarkozy, who is expected to approve it before parliament takes a break at the end of February ahead of the presidential election.

Tahsin Burcuoglu, Turkey’s ambassador to France, said the bill was a “sensitive issue” that could prompt Ankara to downgrade diplomatic ties with Paris.

“Turkey will never accept such a law, and now everybody will pay a price, including Turkey, France, and the Armenian communities,” he said.

“You can expect diplomatic relations will be at the level of charge d’affaires, not ambassador anymore.”

Morning headlines in Turkish newspapers were anything but calm.

In Ankara, Melih Gokcek, the city’s mayor, has previously said he will consider renaming the street where the French embassy is located as Algeria Street, and erecting a memorial to Algerian victims of French colonial oppression.

Armenia, meanwhile, praised the vote, with Edward Nalbandian, the country’s foreign minister, saying: “This day will be written in gold, not only in the history of friendship between the Armenian and French peoples, but also in the annals of the history of the protection of human rights worldwide.”

Vartan Oskanian, a former foreign minister and the current president of the Civitas Foundation think tank, told Al Jazeera from Yerevan that the French decision was long overdue, and “should have happened before.”

“This crime was committed in 1915, and it is still being denied by the perpetrator,” he said. “The Armenian community in France is a product of that genocide and deportation.”

“This is an international cause, and there are certain crimes in the world, such as genocide and crimes against humanity, that if denied, are a threat to peace and security.”

France has already recognised the killings as a genocide, but the new bill would go further, by punishing anyone who denied it with a year in jail and a fine of $57,000.

“We have previously determined the steps to be taken if the bill is finally adopted. No one should doubt it,” the state-run Anatolia news agency quoted Davutoglu as saying.

The passing of the bill through the French parliament has prompted street protests in Paris by Turks from France and neighbouring countries, as well as diplomatic protests.

Erdogan earlier accused Sarkozy of using the bill for electoral gain, in a bid to secure the votes of French Armenians before this year’s election.

Armenia says that at least 1.5 million Armenians died under Ottoman rule when they were deported from eastern Anatolia to the Syrian desert and elsewhere in 1915 to 1916. They were killed or died from starvation or disease.

Turkey estimates the total to be about 300,000. It admits that atrocities were committed, but argues that there was no systematic attempt to destroy the Armenian people. It says many people on both sides suffered and died amid the chaos of World War I. 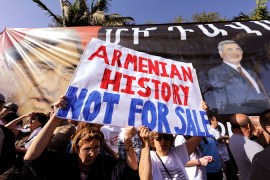 Placing genocide within an appropriate legal context is the best path to reconciliation between Turkey and Armenia. 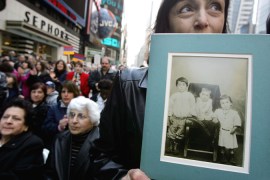 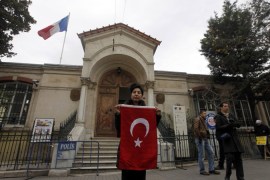 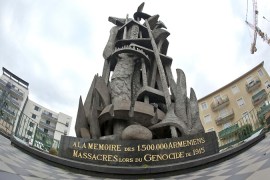