Abd-Rabbu Mansour Hadi has been sworn in as Yemen’s new president after being declared the winner of last week’s single candidate vote, completing a transition of power that formally ends Ali Abdullah Saleh’s decades-long rule.

Hadi, who served as vice president under Saleh, took the oath of office at a ceremony in Sanaa on Saturday attended by his predecessor, who returned to the country from the US for the occasion.

“The election grants Yemenis the hope and it holds the parties and political forces the responsibility to overcome the past,” Hadi said.

“Power in Yemen is now based on popular legitimacy and no one can raise doubt about it.”

Hadi takes power as part of a transitional deal to end months of deadly unrest in which thousands regularly took to the streets to call for Saleh to go in one of the Arab Spring’s most enduring uprisings.

Saleh left the country last year to undergo medical treatment, first in Saudi Arabia and then the US, for injuries sustained in an attack on the presidential palace.

Yemen’s electoral commission says Hadi that 65 per cent of registered voters cast ballots in last week’s vote in an apparently strong show of public support for the political succession.

Mohammed al-Hakimi, head of the electoral commission, said on Friday that 6.6 million votes out of a potential 10.2 million went to Hadi.

More than 99 per cent of the 6.6 million votes cast were for Hadi, said the commission. The remaining 25,000 ballots cast were invalid. The only option on the ballot was to vote “yes” for Hadi.

Al Jazeera’s Hashem Ahelberra, reporting from Sanaa, said the strong turnout should end the debate over the legitimacy of the new president.

But our correspondent said Yemenis were still concerned about the return of Saleh, fearing that he could stoke tensions in the country.

Many fear Saleh, who has cast a large web of tribal and family relations during his three decades of rule, may still try to pull the strings during the transitional period until a new constitution is written.

The US, which had long considered Saleh a crucial regional ally in fighting al-Qaeda-affililated fighters in the south of the country, hailed the election as “a positive step forward”.

“It speaks to the fact that Yemenis are ready to move on to their future,” said Mark Toner, the state department spokesman.

Hadi faces a broad range of problems including a growing threat from al-Qaeda, widespread poverty and a southern secessionist movement.

He has to restructure powerful security forces packed with Saleh loyalists, launch a national dialogue that includes southern secessionists, and appease a restless religious minority in the north as well as disparate opposition groups in the heartland. 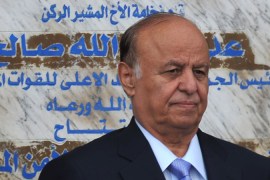 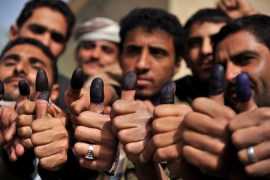 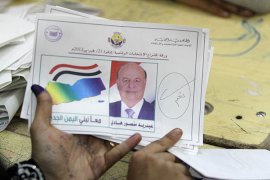 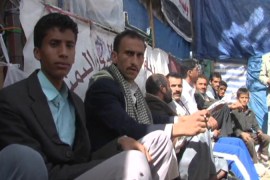