“As of today, 2,700 people, including at least 100 children, have been killed by military and security forces since mass protests erupted in mid-March,” Kyung-wha Kang, deputy UN High Commissioner for Human Rights, said on Monday.

She said “the scale and nature of these acts may amount to crimes against humanity” and that her office was prepared to send its confidential list of 50 suspects linked to those crimes to the International Criminal Court, if the UN Security Council refers the situation in Syria to the Hague-based court.

She called on President Bashar al-Assad’s government to co-operate with an international inquiry into the bloodshed so as to ensure accountability for all violations and to “break the culture of impunity in the country”.

Assad has repeatedly said Syria is facing a “foreign conspiracy” and has blamed most of the deaths on “armed criminals”.

In the latest bloodshed, activists said security forces killed nine people on Monday, five of them in the flashpoint central province of Homs.

“Five residents, including a woman, were shot dead on Monday by security forces, who have been conducting a sweep in Houla since Sunday,” the UK-based Syrian Observatory for Human Rights said in a statement.

The assault on Houla, a collection of villages, followed a large protest on Sunday demanding Assad’s removal.

The Observatory also said a “Kurdish youth was martyred in the village of Maruniyat [in Latakia province] during a raid by security forces.”

Civilian deaths were also reported in Idlib and Hama.

The official news agency said an “armed terrorist group” killed four security police overnight in an ambush near the central city of Hama, which was among the hardest hit cities in an escalation of military attacks that coincided with the beginning of the Muslim fasting month of Ramadan at the start of August.

Since the uprising began, several opposition groups have emerged united in their call for the regime’s ouster but divided about how to do it.

The latest group, the Syrian Coalition of Secular and Democratic Forces (CSDF), meeting in France, issued a statement on Monday urging the international community to protect civilians against the repression.

The appeal – an implicit call for foreign intervention – conflicted with pleas by other opposition groups for an end to the bloodshed and political, economic and social reforms.

“We call on the international community to adopt a United Nations resolution to protect civilians,” said a statement modelled on UN Security Council Resolution 1973 that authorised international action in Libya. 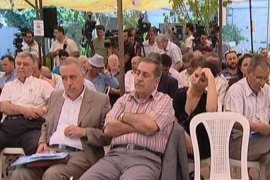 Demand comes as more than 200 opposition figures meet outside Syria’s capital in bid to tackle crackdown on protests.